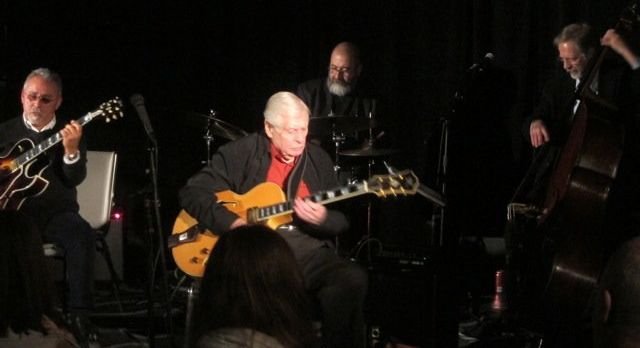 Lowe continues to take chances, improvising in the moment in a sublime and swinging concert at the new Dizzy's.

There is something magical, and instructive about watching guitar great Mundell Lowe perform. Years of living "in-the-moment" have been honed into a personal improvising aesthetic where the proof of virtuosity involves what he doesn't choose to play as much as what he does.

Using this material as a sort of lingua-franca, Lowe works without the aid of a safety net. He'll announce a tune at a moment's notice, or accept a suggestion from a bandmate and instantly jump into it absent a chart or discussion of arrangement.

Lowe and Ferguson began the evening as a duo, breezing though "Gone With The Wind," with effortless élan, showcasing the remarkable vocal abilities of Ferguson, whose light, limber tenor is a perfect bookend to his liquid, sonorous work on the double bass.

"Haunted Heart," was next, Lowe still taking chances with his chord choices and launching into a sinewy recap of the melody, framed with snippets of blues and rich voice-leading.

Lowe took a breather as Valle and Banda joined the bassist to explore a nuanced, "Bahia," led by the guitarist's burnished chords and piquant octaves as Banda's irresistible pulse fueled the ride. Ferguson took on a Scott LaFaro type role, with glissandi and stabs into the upper register.

Lowe returned, leading the entire ensemble through a series of swinging highlights made profound by his astonishing economy, in which all extraneous artifice was peeled away to expose an essential truth in the material.

Especially noteworthy was a breathtaking version of "Moonlight In Vermont," where Lowe's notes fell like gentle rainfall into a still pool, followed by Valle's chord-melody distillation and Ferguson's rubbery appoggiatura.

A wonderful evening of intuitive exchange by four virtuoso listeners.