27 years ago this week: The Dead Kennedys at the California Theater

On this day in local rock history, the DKs played one of their final shows with Jello Biafra

12-14-85: The Dead Kennedys played one of their final shows with original singer Jello Biafra, at downtown’s California Theater. As the set wrapped up, raucous fans tore up the seats and pulled curtains down from walls, causing police to call out a riot squad, though officers stayed outside the building until the crowd dispersed on its own.

The fifteen song set included tunes off their newest album Frankenchrist, as well as “Triumph of the Swill,” “Police Truck,” and the encore “Holiday in Cambodia.”

The show's promoter - future Casbah owner Tim Mays - recalls "The police were called in by the fire marshalls - who were freaking out about fans not staying in their seats and clogging the aisles. Some seats got destroyed...At one point I went outside to get some air, and there were police on all four corners surrounding the block the theatre was on. They weren't going to let me go back inside."

"Finally, one of my production managers convinced a female cop he happened to know that I was indeed the promoter and not just some random fan who had wandered outside." 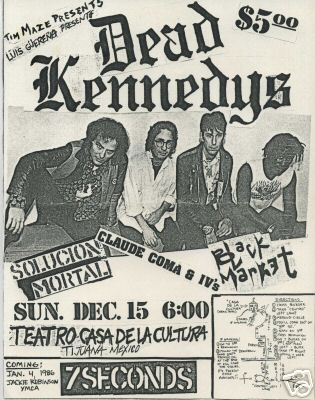 On the night of the Dead Kennedys show, outside the venue, Mexican police arrested several San Diegans “for no apparent reason,” according to a report by newspaper columnist George Varga.

After the DKs debacle, the California Theater only hosted a handful of punk shows for the remainder of its existence as a concert hall.

After TJ, the band with Biafra only played three more concerts before quitting the concert trail a few weeks later.