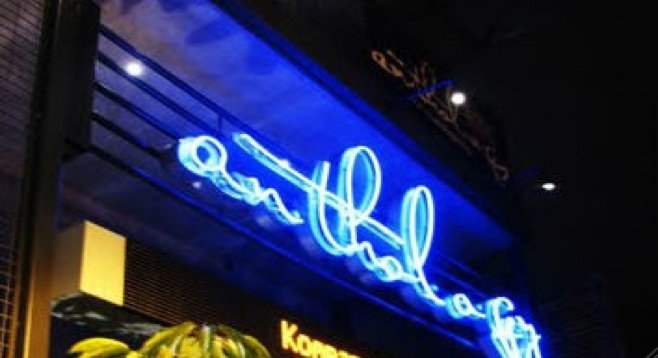 Anthology, the high-end restaurant/music venue in Little Italy, is temporarily postponing its concert schedule. No national acts have been booked for 2013, says co-owner Howard Berkson.

"We're spending a few days in January to close to assess the scope of work and cost of refurbishment upgrades and repairs. As soon as we do that we will reopen."

Berkson says that no shows are booked after December, in case the repairs take longer than necessary. Berkson explains that he pays his artists a 50 percent nonrefundable deposit to secure them for a certain date. He says if the repairs took longer than planned, he would not get those deposits back.

Known for its superior acoustics and attractive interior, the five-year-old India Street music venue is known for presenting R&B, jazz, and blues artists, such as Dr. John, the Fabulous Thunderbirds, Richie Havens, and Al DiMeola. Anthology is known for paying top dollar to secure headliners such as Branford Marsalis and Natalie Cole. Tickets for those artists sell in the $85–$125 range.

A New Year’s Eve show with a classic-rock cover band has tickets in the $15–$185 range. That is the last show booked at Anthology this year.

Dinner shows have a 300-plus capacity. Without tables the room can hold 650.

Meanwhile, the abrupt closure of 4th&B following a court-ordered eviction of owners Vince and Judy Puma, who owed $125,000 to landlord Crown Investments LLC, has agents scrambling to move their artists who were booked at 4th&B to new venues. Barrington Levy (December 14) will now be at the World Beat Center, and Soulfly (February 14) has moved to Brick by Brick.

Roger LeBlanc, who books the Coach House in Orange County and the Canyon Club in Agora Hills, says 4th&B with its $32,000 monthly rent may be a challenge for an independent owner/operator who is not connected with a major entertainment company such as Live Nation/House of Blues or AEG/Goldenvoice. “That’s a big nut in a tough market. You’ve got the casinos, Humphreys, the Belly Up, and the Del Mar Fair. There’s a lot of competition for entertainment down there.”