Sink, or Swim: East of Sweden

East of Sweden's drummer Jeffrey O'Brien learned to play cello this summer. But don't expect him to have it onstage when the band performs at their record release party this weekend. "I play cello on the album," he says by phone, "but those parts will be replicated at the show by a guest guitarist."

With Eric Sellers on guitar and bassist Andrew Loc, EOS is a trio. "We decided that we'll play the new album, Sink or Swim, from beginning to end." He says that necessitates the addition of guest players to cover the parts as they appear on the record. "A couple of the new songs have never been played live."

O'Brien didn't just learn cello, he bought himself a new one. "The cello is a pretty difficult instrument. Having played guitar, I thought some of those skills would transfer over but no. I've always wanted to learn," he says. "It took a long time to get around to it."

He says the band's focus has been on releasing the record and on promoting it. "We're going to be playing Adams Avenue in September, and we have a tour in the works. We're excited."

Earlier, O'Brien told the Reader about the origins of the band's name.

“I actually do have a little Swedish heritage, which had nothing to do with how we came up with that for a name. But I did like it for that, really.”

Rather, he says the band name is more of a play on words inspired by the Steinbeck novel East of Eden. "It’s a classic. I read it in college, and I recall that it’s about things like depravity and self-destruction. From Steinbeck himself:

We have only one story. All novels, all poetry, are built on the never ending contest in ourselves of good and evil. And it occurs to me that evil must constantly re- spawn, while good, while virtue is immortal. Vice has always a new fresh young face, while virtue is venerable as nothing else in the world is."

Does any of this hold water with the band? No. Not so much.

“When we were going through hundreds of names, trying to come up with something for the band we each went into or little artistic corners." In the end, he says it was Eric Sellers who came up with East of Sweden.

“He actually has the book. I saw it on his bookshelf.”

But that CD title -- Sink or Swim. Sort of like David Lee Roth's assessment of a career in rock and roll, yes? "There's a lot of ways to take that title," O'Brien agrees. "But for us, it really tied everything together." 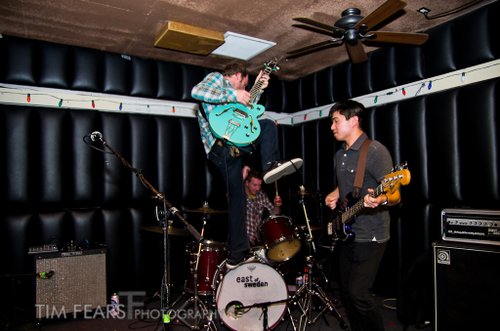 What would John Steinbeck say?