The Grandmothers of Invention "Roxy and Elsewhere and More tour," featuring three former members of Frank Zappa's Mothers of Invention (Don Preston, Napoleon Murphy Brock, and Tom Fowler) will be performing the music of Frank Zappa at Anthology on Friday, August 17. The show promises to be a night of thorough entertainment, featuring virtuosic playing, bizarre humor and the performance of many Zappa/Mothers beloved compositions.

“This is going to be the most exciting tour of my entire career,” says singer/keyboardist Don Preston (MOI member 1966-1974). Joining him at Anthology will be Napoleon Murphy Brock (MOI member 1974-1984) on lead vocals, tenor sax, woodwinds, and dancing, and Tom Fowler (MOI member 1973-1978) on bass and chair dancing. The band is filled out by Chris Garcia (drums, percussion, marimba and vocals), and Robbie Seahag Mangano (electric guitar).

Having seen Zappa several times myself, as well as subsequent versions of the Grandmothers, I'm impressed with how the band re-creates the music as originally written and produced by the late musical prankster. Setlists from the tour so far (posted at http://www.grandmothersofinvention.com) indicate the San Diego audience is likely to hear Zappa-penned classics like "I Am The Slime", "Trouble Everyday", "Village Of The Sun", "Big Swifty", "Carolina Hard Core Ecstasy," and more.

“Once again, after all of these years, [you'll] be able to witness this music preformed as it was intended: total music theater,” according to Napoleon Murphy Brock. 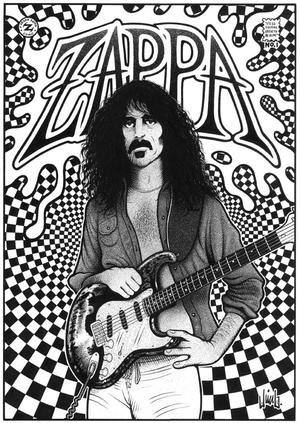 Frank Zappa’s family moved to San Diego in 1954. Thirteen-year-old Frank bought his first record player at Valley Music in El Cajon. He soon began buying used records in a retail vinyl record nook at the Maryland Hotel. One day, he saw a Record Sale sign outside a La Mesa hi-fi store, Alan’s Music Center. In the bins, he found a record that he once read about, in an interview with a record store owner who said he used it as a stereo hi0fi demonstration album, but that it was so weird that he coiuldn’t talk anyone into buying the album.

That album, the Complete Works of Edgard Varese Volume 1, was in the bin at the La Mesa shop. It was priced at $5.95, but Zappa only had $3.80. The store owner sold it to him anyway, and the record would have a huge influence on Zappa’s musical development.

He attended Grossmont (freshman year) and Mission Bay High School (as a sophomore). Along the line, Mission Bay band director Robert Kavelman turned young Zappa on to composer Anton Webern and 12-tone music, another major inspiration. He also drummed for the school R&B band, the Ramblers, but they fired him for using too much cymbal.

The Zappas moved to Lancaster, CA in 1955. Later, Zappa’s band the Mothers of Invention first played San Diego in May 1966, at a club called Jazzville, opening for Little Richard. The Mothers returned to town on June 1, 1968, to play the Community Concourse downtown as part of something called Happening #10.

San Diego guitarist Mike Keneally played in the Zappa band for a number of years. In early 2011, UK’s Mojo Magazine released a Zappa Special Edition in Europe, including a few pages on his days in San Diego.