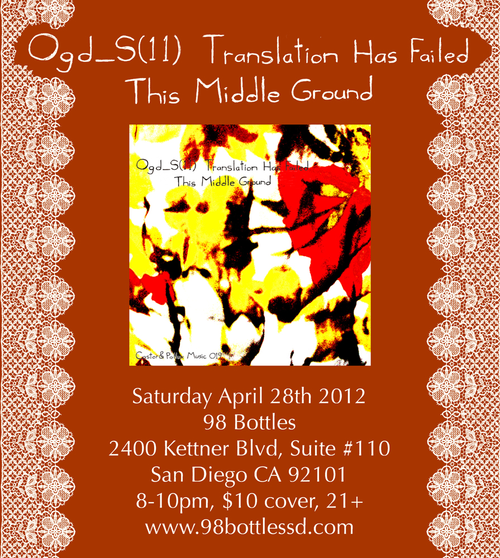 Former San Diegan, drummer, vibraphonist, composer Nathan Hubbard will be making the trip from his new home in Arizona to debut a new release from his highly original group Ogd_S(11) Translation Has Failed titled, This Middle Ground.

I asked Hubbard about the somewhat mysterious sounding band name.

"One of the major factors for this group is that the music is more important than the lineup, so members names are rarely mentioned, or, if they are mentioned, they are given aliases. The name was a flash of inspiration, or maybe just an attempt to escape the trappings of the usual names. I had no idea how much this would freak people out-- I've had several club owners/promoters completely balk, not use the band name, or list the band as Nathan Hubbard Group. For me, I have a lot of ideas and interests, and have made a decision to divide these interests into different bands. When I started this group, I was militantly not using my name, and it was great to see peoples reaction to the music--good or bad, it was completely honest."

Hubbard describes the music on This Middle Ground as Bossa Nova/Doom Metal /Opera. Having checked out the new release, I can attest that that is a pretty apt description. I had to ask him about how that combination came about.

"Well, I should say that the "Bossa/Doom/Opera," moniker is used mostly to open a door for people to step through. There are a bit of those genres in the music, (as well as several others), but the larger scope of the piece is that it is a collection of songs about lost love. These pieces were written as a complete suite to give a larger picture of the topic (hence the "opera" moniker. And, if you're writing songs about lost love, what better setting than the lilting subtleties of the bossa nova, or oppressively slow atmospheres of doom?"

One more thing that sets this project apart from the expected is Hubbard's use of pre-digital drum machines.

"I love that part. We originally recorded it with myself playing acoustic drums, but it worked better with the Casio. My function in this group is equal parts drummer and producer, and I have no drummer ego where I need to be featured. And I'm a huge fan of pre-digital electronic drum sounds. For example, the sound of a Casio drum machine might remind you of listening to music in an elevator. You notice that many artists are using these machines with an ironic, tongue-in-cheek approach. This is not the case with this record--I love the Bossa Nova and the Casio drum machine, and the two together are like peanut butter and chocolate."

I'm listening to This Middle Ground right now, and I've got to say this is some beautiful, wildly creative stuff. There's a woman singing, (aliased as the "Cricket Queen") who is just remarkable.

Expect a large group (six or seven players, perhaps), aside from the aforementioned Cricket Queen, there might be Given/last minute choirboy; Sir Edward on acoustic and electric piano; Pad See Ow! on bass and electronics; Harry The Shadow on Casio, piano and percussion; Nate Atwood on electronics; D.J. Tenshun on turntables.