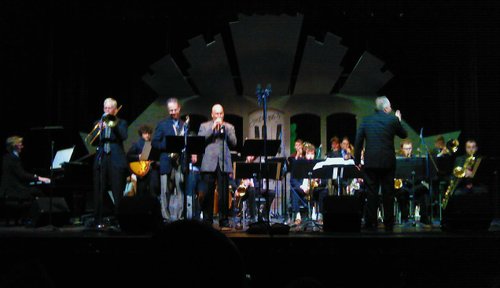 Live is the only way to experience a big band. There's no other way to absorb the power of it all, unless those soundwaves are striking your ears in a real acoustic space. The SDSU Jazz Ensemble has loads of power, and more importantly, they have learned to blend their individual, and section dynamics into a pleasant whole--leading to an all around enjoyable listen.

Linvill got another feature on "Stand Up Eight," a rockish piece with churchy chords, superb dynamics and a great solo. This Linvill is something else. He's got a distinctive voice, somewhere between Joe Henderson and Jan Garbarek, and he is consistently entertaining.`

Scott Kyle came to the stage for an out of the box arrangement of Pat Metheny's "It's Just Talk," blowing fat and mellifluous, and tearing up the changes. He stuck around for "Emily," starting as a duo with Kornhauser, who waxed poetic until the band joined in.

"You Don't Know What Love Is," was taken as a swinger, which I could have done without. It's a ballad, for heaven's sake, just because it can be played fast doesn't mean it should be. Still, there were smart solos from Kornhauser, Linville and trumpeter Teagan Taylor, who is starting to make a name for herself around town.

Beautifully drawn, orchestral chords brought Christopher Hollyday to the stage as he outlined "Hey There, You With The Stars," in a creamy vibrato, reminding me of Johnny Hodges. He stayed on for "Willow Weep For Me," which had a schizophrenic arrangement--not that it mattered, he burned all they way through.

Cannon emerged for "Autumn Nocturne," taking the lead on a lush, swirling arrangement, and then bringing down the house with a smoking, swing-your-ass-off solo on "Secret Love," which was the first time I could really relate to drummer Larry Grano's ride cymbal concept.

Young guitarist Kevin Jones got a feature on "Blues For Itchy," alternating between fusion and straightahead grooves. His solo showed promise.

As much as the celebrated alumni soloists, I really enjoyed the work of tenor saxophonist Ryan Linvill. This cat can flat-out play. I was also especially impressed with bassist Crow, who has great time and a big sound, and pianist Kornhauser, who lit it up every chance he got.