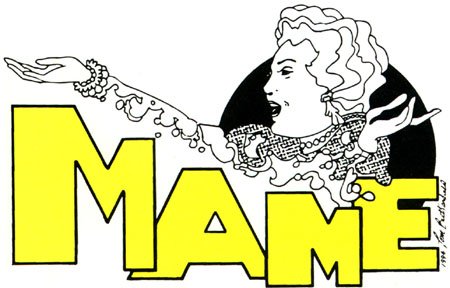 I did listen to the students sing at Point Loma. All together, I'd say there were about 20 students and seven of them sang.

Anthony was the first singer. He is 17 and was recently a lead in the musical Mame at Lyric at the Birch. Anthony is also contracted for chorus in San Diego Opera's production of Moby Dick. I was impressed with his singing. I wasn't too sure what feedback to give him because at 17 he's got a lot going for him. We talked a little bit about increasing the emphasis on the text around his high note so that the high note doesn't stick out as much.

Jon Lacayo is a 19-year-old tenor and he sang a piece from Puccini's Manon Lescaut. He sang well, but every now and then he added a nervous shuffle to his performance.

Jon's aria was set in a party scene and he's supposed to be flirting with the girls. I suggested he mentally put specific girls in specific places and then refer to them during the aria. Voice teacher Juliette Singler suggested we bring some girls up on stage and have him sing it again. I asked the girls to stand with their backs to Jon and to not respond to him. Jon's job was to make them react. The difference was obvious as Jon sang his aria while physically pleading with the girls to notice him.

Krista Wilford sang a song called Fix Me Jesus for my Dying Day. The phrase "fix me" is repeated throughout the song. I asked Krista to take some time this week to attach a specific thing she wanted to fix for each repetition. Some things might be small and easy to fix, others large or difficult. Some things might be fixed today, some tomorrow. Ultimately, all the fixing was in preparation for the "dying day". We discovered that the phrase is repeated for a reason.

Katie O' Gorman sang an aria from Mozart's La Finita giardiniera. She had solid vocal production but, as is the case with students who are learning to sing, the characterization wasn't developed. She repeats the text, "I will die" and we discussed different ways to have the character discover what that means. Was it hyperbole followed by a realization that death will come? I am convinced that learning solid vocal production is the most important thing for students. After the technique is sound and secure, dramatic choices are possible. Katie is right where she needs to be.

Justin Hsu sang an Italian art-song that had several verses. During his singing, the dynamic intensity remained in heart broken stupor--which was appropriate since the song is about a lost love. However, if the singer has a broken heart, he can also be angry. He can also remember how happy he was before the loss. I asked Justin to sing two verses. He was to sing the first one like a monk and the second one like a full-blown opera singer. The monk version sounded much like his original performance but when he tried to sing it ala opera, his body language changed. His gestures were more confident and presence on stage had more authority.

Christen Horne is 21 and is one of the three singers who moved through to the Regional Round at the Met Auditions two weeks ago. She sang Juliet's Waltz from Gounod's Romeo and Juliet. It was a piece she hasn't worked on for a while. She also sang well but hadn't completed her character work. I wasn't concerned because each time I've seen her sing, her characters have been solid. We talked a little about being nervous and her process for overcoming it. She takes the focus off of herself and gives it to the characters and the stories they're telling. In other words, she stops worrying about herself and let's the character take the stage. Brilliant!

Aida Alberro wrapped the session up for us. She wasn't prepared to sing anything but she had displayed enough personality over the course of our time together that I made her get up there and sing anyway. Aida has a lot of voice inside of her but she wasn't planning on singing. During her song, she would trip on a word or note and make a goofy, disarming, face. It was an endearing performance. We talked a little bit about confidence after she sang. Even when she's not ready to sing, she can give us a song without apologizing for it not being prepared. I asked her to sing a phrase from any song she wanted but it had to be a phrase that she felt she owned. I didn't recognize the music she sang but the confidence was there.

Hmm, that Aida Alberro sounds like a "Diva" to me... What's so endearing about goofy and disarming faces during a performance anyway?

ya gotta start somewhere...bless them and let their voice ring out truer and better next time!!!

"I am convinced that learning solid vocal production is the most important thing for students. After the technique is sound and secure, dramatic choices are possible."

-This is an interesting discussion that I think gets lost in many academic institutions. Of course learning a solid vocal technique is what has to be 'preached' when teaching students. One must know how to sing and the proper way to achieve certain ends, But I humbly disagree that vocal technique is created and then dramatic choices come out of it. In fact, I'd wager that this thinking (which is the predominant method in American Academia) is the precise reason for the sort of colorless singing that has been encountered in the professional world since the end of the golden era. "Dramatic choices" are conscious attempts to do something different to your vocal production to create a different reaction both in your own musicality and in the way your audience perceives your sound production (leaving physical gestures out of the equation, although I also believe these are equally as ties into the whole discussion). If you are trained to "sing in a proper way" with "good technique" you will be (this goes for almost EVERY performer) trying to fit said "dramatic choices" within your conceived world of "proper technique".

It's a very small distinction in style of singing and teaching but the differences in result are stark. Why not from the very beginning of vocal training approach those "dramatic choices" and discover a "proper technique" for doing something completely different then what you would find in your everyday vocalizes? Being a singer who wandered for 3 years in academic institutions with teachers who were obsessed with "proper technique" and learning pretty much nothing new about how to "really sing" as Garrett so frequently and awesomely puts it, I found it absolutely liberating when I finally encountered a teacher who said "lets work from the literature and drama to develop the technique for THIS situation". This method allows for exponential growth throughout ones CAREER not just in the initial learning phase, as you assimilate these individual situations into an overarching library of abilities to pull from and truly become a dynamic performer. Of course there are certain fundamentals that ALWAYS apply, but isn't it true that in different situations (and on different days and in different moods since our instrument is contained inside our body) these fundamental techniques are tweaked and used in slightly different ways? Think about all the rigidity and sterility you find in today's top singers as they attempt to recreate the same "cd album quality" sound in everything they do. This will inevitably lead to the decline in artists like Ferruccio Furlanetto and Bryn Terfel who can conquer a wide swath of roles and styles with ease and lead to vocal tragedies like Villazon and Dessay who are too rigid to even continue in their narrow fach for a prolonged career. This in no way takes away from Katie's singing. I've heard her first hand (she's a friend of my family's) and the girl is headed for great things and is exactly "right where she needs to be."