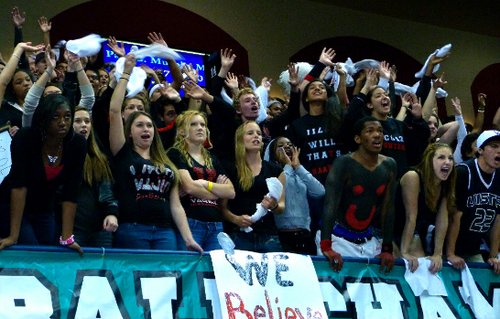 Vista students cheer on the Panthers during the Division I Finals on March 3 at University of San Diego. The boisterous student section’s cheering was ultimately in vain, as Vista fell to Torrey Pines 55-41. 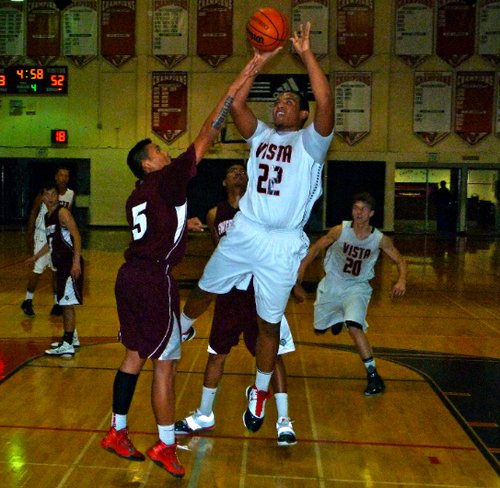 Vista forward Patrick Johnson hangs in the air over Sweetwater forward Junior Bautista for an off-balance shot in the first round of the Division I CIF playoffs on Feb. 21. Behind a balanced attack, the Panthers eliminated the Red Devils 77-60. 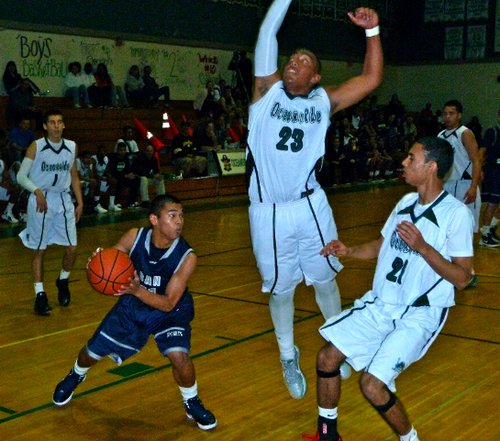 San Marcos guard Mark Pacia looks to get around the Oceanside defense of guards Tofi Pao Pao (23) and Justin Gilbert (21) after sending Pao Pao flying with a shot fake in a nonleague contest on Jan. 4. The visiting Knights prevailed in a 47-45 defensive struggle. 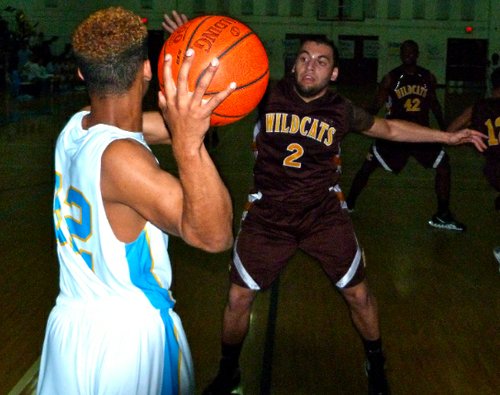 San Ysidro guard Chandler Tarrant looks for an open teammate around outstretched El Camino guard Travis Pao Pao in the marquee game of the Coaches vs. Cancer Showcase on Feb. 11 at San Ysidro High. The Wildcats won in a 57-56 thriller that locked up the top seed in the Division I playoffs. 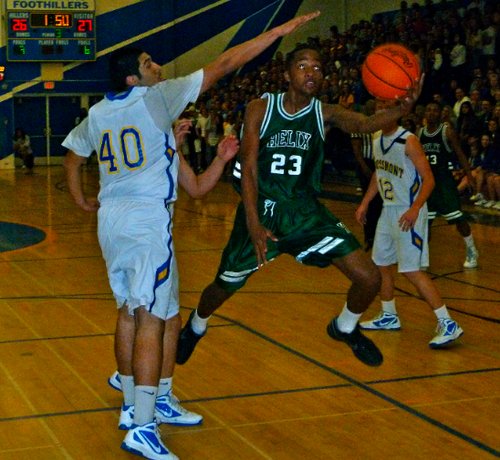 Helix forward Kaelen Mitchell drives past Grossmont forward Bilal Rahim to set up an acrobatic shot attempt in the Grossmont Hills League finale on Feb. 17. In a winner-take-all contest for the league title, the Highlanders broke free from a defensive struggle in the second half for a 54-43 victory. 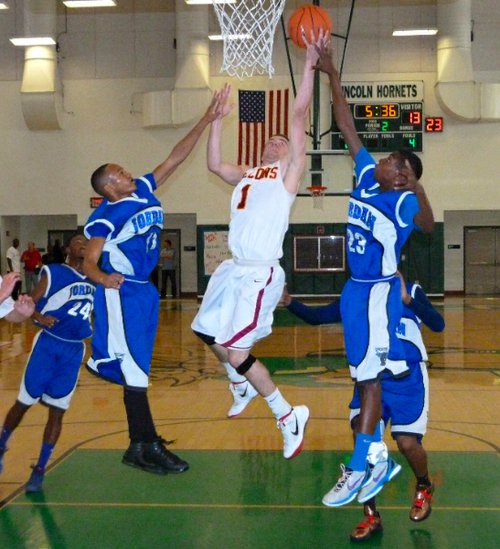 Torrey Pines guard Joe Rahon goes up for a layup between Long Beach Jordan guards Kaleahl Ferguson (11) and Milan Meeks (23) in the SD-LA Hoops Challenge at Lincoln High on Jan. 7. Torrey Pines was the only San Diego team to win in the six-game showcase, edging Jordan 50-48. 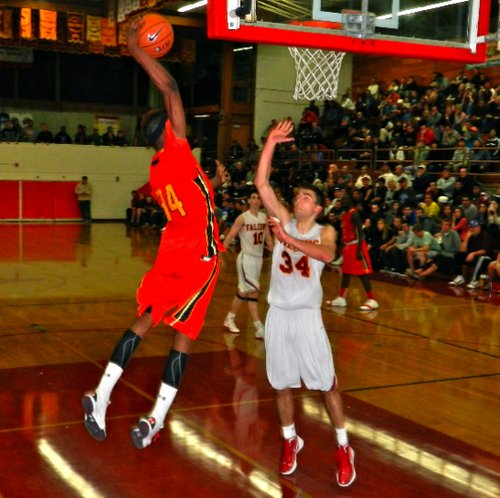 Woodland Hills Taft forward Anthony January cocks back in midair on his way to a one-handed dunk over Torrey Pines forward Sean Milmoe in the second round of the Holiday Classic National Division on Dec. 28. The Toreadors beat Torrey Pines, La Costa Canyon and Lincoln in the preseason. 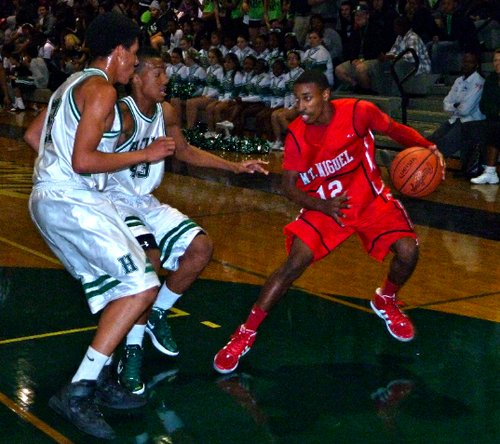 Mount Miguel guard Marcus Booker steps back to try and shake Helix forwards Derrick Chandler (right) and Isaac Randall in a Grossmont Conference Tournament game on Jan. 11. The Highlanders knocked off the Matadors 49-42 in one of the biggest upsets of the preseason. 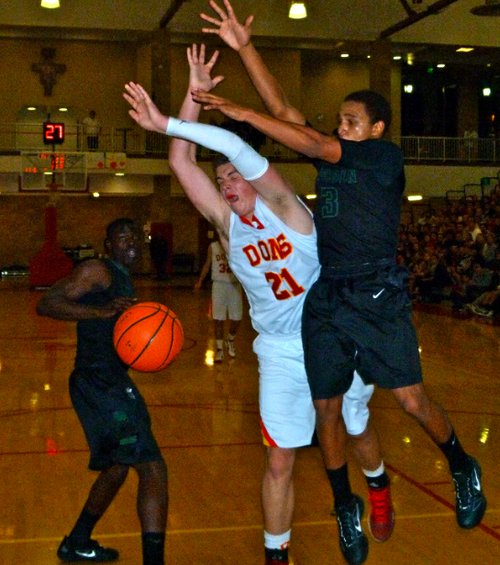 Cathedral Catholic forward Brendan Reh loses the ball in midair between Lincoln guards Fred Melifonwu (left) and Keone Spates in the key in a Western League showdown on Feb. 10. The Hornets beat the Dons 72-68 in a win that served as a springboard to the league title. 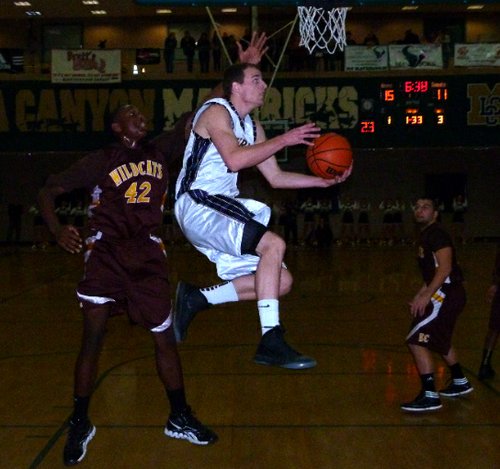 La Costa Canyon forward Matt Shrigley ducks past El Camino center Danny Garner Jr. to set up an acrobatic layup attempt in an Avocado West League contest on Feb. 8. The Mavericks beat the Wildcats in overtime as part of their best season in school history.