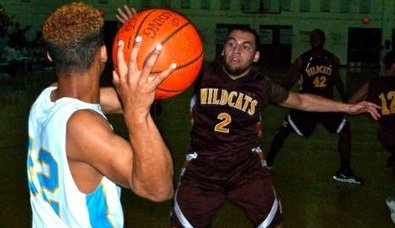 Wildcats sneak past Cougars in matchup of top Division I clubs

SAN YSIDRO – With the top-seed in Division I up for grabs in the marquee game of the Coaches vs. Cancer Showcase on Saturday night, El Camino senior big man Danny Garner Jr. delivered his biggest performance of the season. Garner Jr. scored season-high 20 points and the go-ahead layup with 19.9 seconds left to lift the sixth-ranked Wildcats over fifth-ranked San Ysidro in a 57-56 thriller.

Garner Jr.’s game-winning basket came off an assist from Wildcats senior forward Dayton Boddie. Boddie drove into the lane and drew the attention of two San Ysidro defenders, dishing the ball to Garner Jr. under the basket before the defense could collapse.

“He had the ball and I was right in front of the rim,” Garner Jr. said. “I knew I had to put it in no matter what. We needed a score.”

On the ensuing possession, San Ysidro had a good look at a game-winning shot, but junior guard Keeko Sinegal missed a three-pointer as time expired and El Camino prevailed. The missed three capped a wild finish that saw five lead changes in the final 2:24.

“It was a good game for the fans, and as a player it was fun,” Garner Jr. said.

San Ysidro (22-4) scored the first nine points of the game and took a 17-4 lead midway through the first quarter on a three-pointer by senior guard Javion Watson. The host Cougars raced out of the gates as El Camino (19-7) struggled to make shots early.

“This is their house and they haven’t lost since December, so we knew they were going to come out hard,” Garner Jr. said. “We just didn’t bring it from the start.”

“We had a tough start, but we battled through it,” Garner Jr. said. “Coach called a timeout and we came together.”

El Camino led by three after the third quarter and took a 50-44 lead with a Garner Jr. three-point play on the opening possession of the fourth quarter. San Ysidro responded with seven straight points to take a 51-50 lead, setting up the seesaw finish.

“We battled through and came out with the win,” Garner Jr. said.

Garner Jr. led all scorers with his 20-point effort. The 6-foot-7 senior provided steady inside offense for El Camino throughout the game.

“I’m trying to get better every time I step in the gym for moments like this where you step up. We needed it,” Garner Jr. said.

Boddie and senior guard Travis Pao Pao each added 10 points for El Camino. The Wildcats are now the frontrunner for the No. 1 seed in the Division I playoffs.

Senior guard Chandler Tarrant scored 13 points to lead San Ysidro, and was one of three Cougars in double figures. San Ysidro lost for the first time since Dec. 26, snapping a 15-game winning streak.

No. 9 Morse vs. Sweetwater

In the fifth game of the showcase, a pair of South Bay rivals traded blows throughout a fast, physical contest. In the end, ninth-ranked Morse held on for a 79-76 win over Sweetwater.

“It means a lot,” said Morse senior guard Marley Simmons. “They live right down the street from us, so there’s always a rivalry between us.”

With 13.6 seconds left in the game, Morse (22-6) took a 77-76 lead on a one-handed leaner by junior guard Alphonso Wilson. Sweetwater sophomore guard Spencer Mattox was called for an offensive foul on the next possession, and after Simmons made two free throws the Red Devils had a chance to tie but missed a three-pointer as time expired.

“We just kept fighting and fighting,” Simmons said. “We knew it was going to be a tough game, and we had a tough game yesterday so we were kind of tired, but we fought through it and got the win.”

Sweetwater (15-11) led 24-19 after a frenetic first quarter and trailed Morse by one at halftime. The Tigers opened up a six-point lead in the third quarter and led 63-60 headed into the fourth quarter.

“They were pressing us and we were going at them,” Simmons said. “They’re quick and fast, they can shoot, and that’s a hardworking team.”

With 3:23 remaining, Morse took a 73-68 lead on a three-pointer by senior guard Corey Phillips but Sweetwater rallied and kept it close down the stretch. Mattox hit a runner with 44.1 seconds left to give the Red Devils a 76-75 lead – their first of the fourth quarter that only lasted for one possession.

Simmons led Morse with 21 points – including 15 in the second half – and was one of four Tigers in double figures. The senior shot 5-for-7 from the free throw line in the final quarter to help seal the narrow victory.

“I knew they were going to start fouling, so we had to tighten up and I had to make my free throws,” Simmons said.

One night after knocking off second-ranked Hoover, Morse avoided a let down against a feisty Sweetwater club. In a loaded Division II, the Tigers are looking like contenders for a section crown.

“We have to keep it going and keep working hard – that’s what we do,” Simmons said. “I’m excited.”

Mattox scored a game-high 26 points to lead Sweetwater, scoring in double digits along with senior guard Johnny Gonzalez (20 points) and freshman guard C.J. Cadua (15). Despite the loss, the Red Devils are on track to make their first playoff appearance since the 2007-08 season.