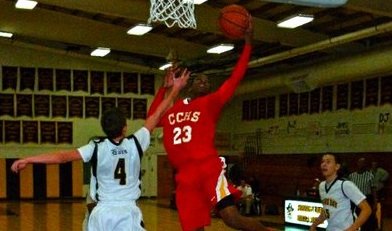 Mission Bay Knocks Off No. 3 Cathedral Catholic in Stunner

PACIFIC BEACH – Mission Bay has the talent to run with any team in San Diego, and it showed on Tuesday against one of the section’s best teams. The Buccaneers stunned third-ranked Cathedral Catholic 63-58, becoming the first local team to beat the Dons this season.

“This is a great motivational win – now we can walk with our heads high,” said Mission Bay senior guard Vince Petties-Wilson. “They were on the top of our list of teams to beat. We knew it was going to be a tough game and we had to just play our best basketball.”

Mission Bay (14-6, 7-3 Western) jumped out to an 8-2 lead to start the game and led 17-16 after the first quarter. The Buccaneers built an eight-point lead early in the second quarter, but Cathedral Catholic (23-2, 9-1) scored the final 16 points of the quarter and had a 35-27 halftime lead after junior guard Nick Prunty hit a three-pointer at the buzzer.

“These guys were undefeated in league, so we knew right from the start that we were going to have to come out and play really strong,” Petties-Wilson said. “Our coach talked to us in the locker room and told us we had to pull together, and that we could still get back in the game.”

Prunty hit a three on the opening possession of the second half to put Cathedral Catholic ahead 38-27, but Mission Bay answered with 11 straight points and tied the game on a Petties-Wilson jumper with 4:10 left in the third quarter. The Dons responded with seven consecutive points, and led 47-43 after a back and forth quarter.

“Our team just had to come together,” Petties-Wilson said. “We didn’t want anybody feeling down on themselves, and we pulled our heads together, told each other we were still in this, got pumped up and started doing what we came to do – get that win.”

Mission Bay scored the first 10 points of the fourth quarter to grab the lead and stun Cathedral Catholic. The run that swung momentum in the Buccaneers’ favor included back-to-back threes by junior guard Jared Kane – his only points of the game.

“Those were big-time threes right there,” Petties-Wilson said. “We had all the luck right there and that’s all we needed to pull it through.”

Cathedral Catholic rallied, and Dons junior guard Brandon Michel hit a three-pointer with 3:45 remaining to tie the game at 55. With 1:21 left, Petties-Wilson cut through the Cathedral Catholic defense and made a layup to put Mission Bay up 60-58.

“We always look to pass the ball and penetrate and kick it out,” Petties-Wilson said. “I saw a little gap open, so I decided to react on it. I cut, got the ball and had a nice little easy basket. That was a really big play in the game.”

Cathedral Catholic junior forward Xavier Williams missed a three-pointer on the next possession, allowing Mission Bay to seal the upset from the free throw line. The Buccaneers made three of four free throws in the final 32 seconds to secure the five-point victory.

“We weren’t really into the first game – a lot of emotions were involved – and that’s why we lost,” Petties-Wilson said. “The whole time tonight we stayed together as a team and we pulled through and got the ‘W.’”

Petties-Wilson scored a game-high 20 points and was one of three Mission Bay players in double figures, along with senior guard Jerald Albritton (17 points) and senior forward James Cloud (14). With the victory, the Buccaneers solidified their status as a title contender in Division III.

“Don’t sleep on Mission Bay,” Petties-Wilson said. “We’re a really good team, we’re still getting better and I believe we have what it takes to win CIF this year.”

Williams scored 13 points to lead Cathedral Catholic. The Dons’ only other loss this season came to Brea Olinda in the opening round of the Torrey Pines Holiday Classic.