In 22 out of 29 tourist destination beaches where the Environmental and Natural Resources Ministry (SEMARNAT, for its initials in Spanish) performed water quality tests of ocean waters, the levels of enterococcus found were greater than the threshold for health risk.

According to the most recent results of the Water Qulaity Monitoring System of Priority Beaches (SISPLAYAS, for its intials in Spanish), which were on July 11 and distributed this week, the highest levels are in Regatas, in Veracruz, with 24,196 enterococcus per 100 milliliters of water. Rincón de Guayabitos 1, of Compostela, had the same quantity and Carabalí, in Acapulco, had 7,270.

The criteria established by SEMARNAT indicate a health risk is present when the readings exceed 200 enterococcus per 100 milliliters of water.

"This level represents a 5 to 10 percent risk of gastrointestinal illness and 1.9 to 3.9 percent risk of acure respiratory infections," said Cofepris is their summer pre-vacation report dated July 6.

The levels of contamination exceed this threshold in 10 out of 10 beaches monitored in Veracruz, 5 out of 5 in Acapulco, 2 out of 2 in Compostela, 1 out of 2 in Zihuatanejo, 2 out of 3 in Bahía de Banderas and 2 out of 7 in Puerto Vallarta.

In Acapulco there were 3 in addition to Carabalí: Suave, Hornos and Caletilla.

In other 4 priority beaches, Almacén in Zihuatanejo, Boca de Tomatlán and Los Muertos in Puerto Vallarta, and Sayulita in Bahía de Banderas, SEMARNAT found inadequate levels of water quality (between 100 and 200 enterococcus).

SISPLAYAS commenced opeartions in December 2008 and monitors 39 beaches considered as priorities for having shown al least one incident of a health risk per year between 2003 and 2007.

So far this year, SEMARNAT has publishes the results of 11 tests. The greatest number of beaches with health risk conditions before the July 11 test was reported on January 24, April 10 and May 29, with 4 on each occasion.

"The intention of the testing is to alert the population so they do not enter the ocean at a beach which shows higher than established levels," the report added.

However, the report does not show data for the beaches in Veracruz and Guerrero. It only considers 3 beaches in Oaxaca and 2 in Tabasco that are "outside health criteria," which it attributes to the effects of hurricane "Carlotta" and to the tropical storm season.

The monitoring of water quality at the beaches of Mexico underestimates the level of contamination that is registered at tourist destinations, said Pierre Terra, coordinator of the Greenpeace of Mexico Oceans Campaign.

The environmentalist urged the expansion of the range of pollutants measured in tests by SEMARNAT and to consider wastewater discharges into rivers that flow into the sea.

"We ask for monitoring that includes more substances, particularly persistent toxins. It is good that enterococcus is analyzed, but it is only one of hundreds of elements that are in the rivers and flow to the beaches," he said in an interview.

"Many of these substances are carcinogens and we do not know how much end up on the beaches as they are not monitored. This is only the tip of the iceberg; there is much more in the water," he said.

In Mexico, he said, only 46 per cent of sewage is treated and the authorities do little to increase the amount of treated sewage.

Veracruz, he pointed out, is the coastal state with the largest volume of untreated sewage dumped into the ocean, with more than 4,000 gallons per second.

Translated by Fulano from an article in noticias.terra.com.mx

Too bad about the sewage pouring onto the sand in Rosarito Beach today. Right by the lifeguard tower too.

This article is well intended and has some useful info, but regarding Zihuatanejo it gives the wrong idea completely. Within the bay of Zihuatanejo there are 8 beaches. Of those 8, the federal government only tests 2, and of those 2, only one is used by the public for swimming (the other has been essentially privatized by a tourist development and access is restricted and nobody swims there). The beach with the pollution problem is called Playa Principal, and it is located in front of the downtown area between a pluvial canal and an estuary. In the rainy season both are sources of runoff from the hillsides where thousands of people have been allowed to live without sewage connections or even bathrooms. Five of the other 6 beaches in Zihuatanejo's bay, including Playa La Ropa, one of the loveliest beaches in Mexico, are unaffected due to the way the ocean currents circulate within the bay.

As a Zihuatanejo resident, my problem with the testing is that it is unreliable and the results are not made known to the public in a timely or easily accessible manner. But most important, even when a beach is determined to present a health risk, no warning signs or announcements are made to the beachgoers who enter the water without any idea of the pollution levels. The only time the federal government actually placed warning signs on Playa Principal, the mayor at that time, Amador Campos Aburto, went with several members of his administration and removed all the signs, saying that the federal government was "trying to harm his image", an entirely irresponsible and reprehensible attitude, as is the act of omission by all the authorities involved when they fail to warn the public or temporarily close polluted beaches. 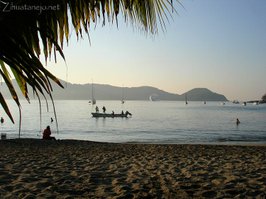 The cruise ship Silver Cloud anchors near the entrance of Zihuatanejo Bay while fishermen cast for bait near Playa Principal.