Save Our Wild Cats Before It’s Too Late

I’m passionate about wild cats. There is something about their silent, graceful and purposeful movement that stirs a primal fear in humans and they invoke a deep, nervous curiosity in me. Many of our cats are hovering on the edge of extinction, mostly due to habitat loss and their highly sought after fur. Something has to be done. 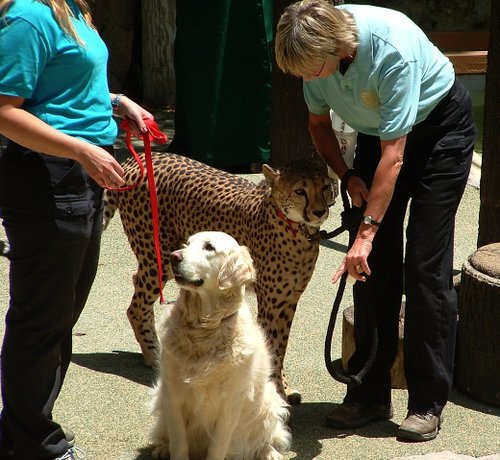 A Cheetah at the San Diego Zoo (with his best friend!)

The San Diego Zoo (http://www.sandiegozoo.org/) have an incredibly vast number of our wild cats on display. To name just a few: cheetahs, leopards, jaguars, lions. small cats and tigers! Their majesty is too behold! See a photo from my recent trip where the keepers put on a show which everyone should see!

But this blog is not about the zoo it is to discuss an issue that should be of great concern to us all. These incredible animals are disappearing and we need to deal with the issues of environmental degradation that put so much pressure on their survival. Most of the wild cats are considered endangered and need more attention brought to their plight.

The Siberian or Amur Tiger has numbers currently in the low hundreds. The largest of the felids, the Siberian Tiger with it’s beautiful rusty colored, transverse striped coat has been for the most part forced out of its natural habitat in China, their population in Korea has been completely destroyed due to war and development leaving only a small population in Russia who have survived wars, revolutions and deforestation. Some efforts are being made by the Russian and Chinese governments to help these animals but political issues seem to hinder those efforts and poachers continue to bribe park officials to gain access to the cats as their body parts are highly prized in Chinese medicine and can be sold for a lot of money on the black market. The Russian Wildlife Conservation Society have been radio tracking the tigers since 1992 as a way of better understand their ecology to assist their conservation needs.

The Iberian Lynx is actually the only wild cat to be listed as critically endangered. There may be as few as 100 individuals still living in isolated pockets of south western Spain. They are believed to have disappear from Portugal altogether. Their habitat has been mostly destroyed, their prey, for which they must compete with red fox and wildcat, has dangerously dwindled and the mortality rate from road kills has been crippling for the species. These groovy looking little cats have a short tail, tufted ears and a ruff of fur beneath their chin with distinctive, leopard-like spots. They love to eat rabbits whose population has declined significantly due to mixomatosis. The organization SOS Lynx works very hard to lobby support for this almost extinct Spanish treasure. They say that if the Iberian Lynx were extinct it would be the first feline species extinction since the Saber Toothed Tiger 10,000 years ago!

The Snow Leopard inhabits over a dozen Asian countries, from Russia in the north, to India in the south. Researchers estimate there to be between 3,500 and 7,000 Snow Leopards left in the wild but no one has an exact count as they are so elusive and inhabit such harsh and remote environments. The number of those likely to reproduce is suspected to be fewer than 2,500. Their amazing long tails are a storage space for fat and the very thick coverage of fur means they can use their tale as a blanket to cover their face when sleeping! They cannot roar! Although they are rare and secretive scientists have been able to understand their biology and their threats in great depth and government and conservation bodies work together with local communities to try to reduce conflict between people and snow leopards. But the Snow Leopard is still considered endangered with the threats of poaching, environmental degradation and local herders who kill the Leopards who take their stock—they do not understand the important ecological role the Snow Leopard plays in their environment, the loss of these animals brings about further environmental issues.   These endangered species suffer from human’s lack of respect for the issues that arise from environmental degradation and our grotesque need to acquire their fur and body parts. The world of humans should focus more on the wonderful world of animals and do all we can to safeguard them from extinction. The amazing people trying to protect them need our help. Wonderful organizations like The Big Cats Wildlife Conservation (http://www.wcs.org/saving-wildlife/big-cats.aspx); the Siberian Tiger Project (http://www.wcsrussia.org/en-us/projects/siberiantigerproject.aspx); and many more listed at See The Wild (http://www.seethewild.org/92/cat-conservation.html) provide an opportunity for us as individuals to make a difference.

I can only pray that it is not too late to help save the wild cat species. In the mean time we can all broaden our spectrum of interest for our beautiful cats, big and small.