Since time immemorial, man has used wind energy to accomplish a variety of tasks. Wind energy was first harnessed as a power source for ships traversing the mighty oceans. With the discovery of the windmill, wind energy was used to power many assorted mechanical devices like pumps and grain separators that previously required expensive labour or cattle to run. Today, with all the cutting-edge advancements in the field of wind energy and the high efficiency and versatility of modern wind turbines, we might just be looking at the greatest solution to all the environmental problems and energy needs of the world.

In a world reeling from the dual impact of large scale pollution and global warming, wind energy comes across as a highly safe and reliable form of alternative energy that leaves a carbon footprint literally next to zero. Many communities and cities around the world are already supplementing their main energy sources with energy from wind farms and there are even some remote communities that totally depend on wind power for all their energy needs. The attractive costs of small sized wind turbine units has also taken wind energy to the masses in a way that would have been unimaginable even a decade ago.

While wind power is slightly more expensive than other energy sources due to the high cost of equipment, installation and maintenance, government environmental subsidies ensure that wind energy remains much cheaper than it actually is. In the long run, wind energy is slated to get cheaper as a slew of governments across the world recognize it as a source of alternative energy with the most potential and the least risk of environmental problems. Most countries are quite encouraging and supportive of wind power because it's a valuable and permanent source of alternative energy that can be depended upon forever.

Wind energy is so popular because it exists virtually everywhere. You can literally put a small wind turbine on top of your house and run your electronics off it. If you think that's oversimplifying it, imagine large wind farms on coasts and out at sea producing hundreds of megawatts of power at peak operational efficiency. Any energy source with such a high cost benefit ratio cannot be ignored for too long. Especially when it's a zero pollution energy source and contributes virtually nothing to environmental problems. With the way things are going, wind energy is fast becoming the most popular alternative energy source across the world.

It's great to use wind energy to reduce your carbon footprint. Though you can't control how much power you actually buy from wind energy companies because most of them feed into the grid, you can consider installing micro wind turbines to power some of the equipment in your house if you live in a really windy location. If you live in a community that has a large wind farm supplying to the grid, you're already using a fair percentage of clean energy. So, whatever your position is on the green energy bandwagon, it's very important to realize that wind power is the cleanest and greenest form of energy. It's the best existing alternative energy source that is capable of solving all our environmental problems. 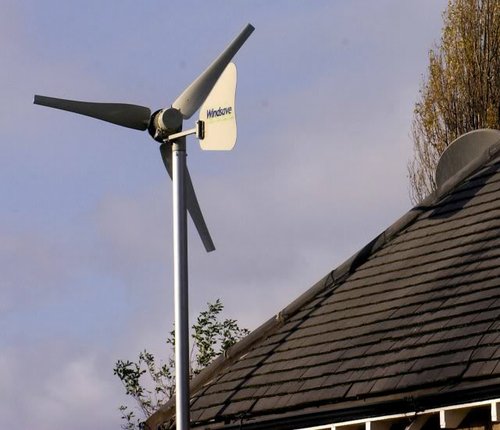