August 12, 1988. It was a sticky 91 in the shade as I stood in line at Chicago's Biograph Theatre waiting to see the first day, first show matinee presentation of The Last Temptation of Christ.

The line snaked down the block and past the infamous alley, home to John Dillinger's fatal wrong turn. Arriving early -- of course! -- we waited for over an hour before the crowd was allowed admittance to the air conditioned auditorium. 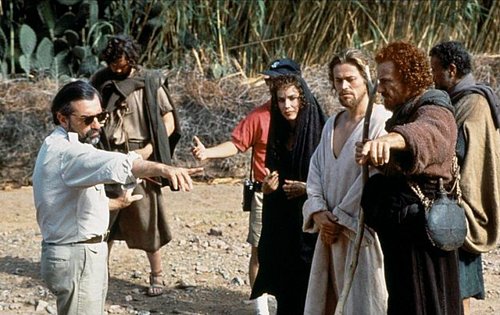 "Your left or His left?"

Other than a mental patient dying to see the latest Scorsese/Schrader collaboration, who in their right mind is going to spend a sweltering afternoon standing on line to see a 164 minute Biblical epic? A cursory scan of the motley crowd confirmed the worst. These boys weren't here for art. They were in it for the controversy surrounding the production and to possibly witness an NC-17 exchange between Jesus and Mary.

A Greek Orthodox Priest sporting an impressive Persian wool beard and supporting a 100 lb. frock coat stood sweating at the front of the line with bullhorn in hand. "YOU WILL GO TO HELL IF YOU SEE THIS MOVIE," he screamed at the crowd. "SCORSESE FILM IS FOR SINNERS," he bellowed.

That last crack was the can of spinach needed to bring out the Popeye in me. "Hey," I shouted back. "I take it you didn't like the movie."

"I have not and will not see it," he confessed.

"Did you see a copy of the script that's been circulating," I continued. "On what basis do you form your opinion?"

"I don't have to see it to know it's a terrible movie," came his thoughtful reply.

My fingertips bounced off my forehead bidding him a fond farewell, and in my best Jimmy Cagney I said, "You had better warm up a tier in hell for me, Father. I'm goin' in!"

It was the first and only time in my life where I watched a movie with armed guards stationed in all four corners of the theatre. Seems like some rascals had phoned in a bomb threat and the Biograph -- wanting to avoid an opening day massacre -- wasn't taking any chances.

The show went off with out a hitch. The crowd was polite, but somewhat disappointed that the film didn't live up to its rating. Contemplating faith is okay and all that, but what about some naked chicks?

I remember that day and the protestors and the funny NY accents in the movie, amusing all the way around.

Not nearly as funny as seeing the first show of BATTLEFIELD EARTH in a theater packed with Scien-tool-ogists. If only protestors kept me away from that turkey!

I saw TEMPTATION in Oakbrook because no way was any theater in Naperville going to touch that hot potato. Seeing the 10:30pm show was a big mistake though - not because of the movie obviously but because it didn't get out until after 1am and emerging from the theater felt like my own version of Easter.

This is Roy Leonard for WGN....