Never so much as a rank and file member of the motion picture industry, Calvin Coolidge "Cal" Worthington's presence was felt in practically every film produced during Hollywood's golden era. At one point or another, his crass commercial spiels and brain cell debilitating jingle splintered some of the finest dialog ever written.

It seems like years since one of Cal's spots for his Carlsbad location played San Diego television. While spending quality viewing time in Burbank, my head almost snapped at the sound of his theme song debasing the flow of TMZ. Did Cal still walk among us or were his commercial pitches being taped in the same heavenly recording studio as "King" Stahlman's?

The most notorious bait-and-switch car dealer ever to polish a lemon has gone to the big dealership in the sky. He was 92. 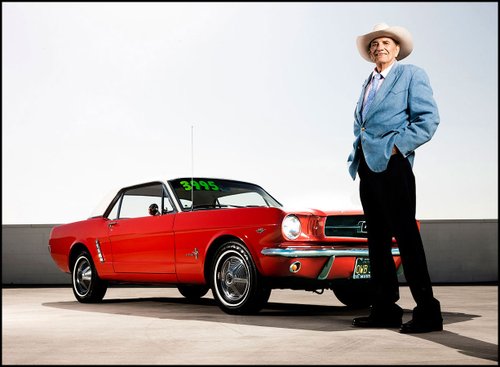 In a career that spanned over 60 years, Cal was best known for his series of 'My Dog Spot' pitches that featured an array of titular animals - none of them canine -- as the pitchman's sidekick.

Another one of cowboy-hatted Cal's celebrated swindles involved a promise to "eat a bug" in exchange for the purchase of one of his rides. Somewhere in the back of my brain lurks a memory involving a buyer who held the man to his word. After signing his name on the dotted line, the customer produced a glass jar containing a bug and demanded that Cal swallow it. Cal's refusal resulted in a lawsuit. The court slapped him with a cease and desist order for false advertising and the gimmick was dropped faster than Cal could rewind an odometer.

That's not Bert. It's a guy named Linn Burton whose delivery was as aggressive as his wardrobe.