Given my recent two week archeological dig into the sacrosanct work of "shadow box" wizard, Jacques Kapralk, did anyone really think I'd limit the largess to one post?

For your delight, I present another handful of movies in miniature form the scissors of studio collagist, Jacques Kapralik, all digitally spruced up by his #1 fan. 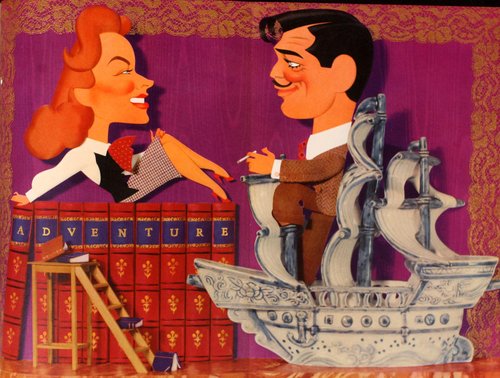 THE FILM DAILY -- March 28, 1946. The poster blared: "Gable's Back and Garson's Got Him!" "Adventure" was Clark Gable's big comeback after serving in the Army Air Corps. 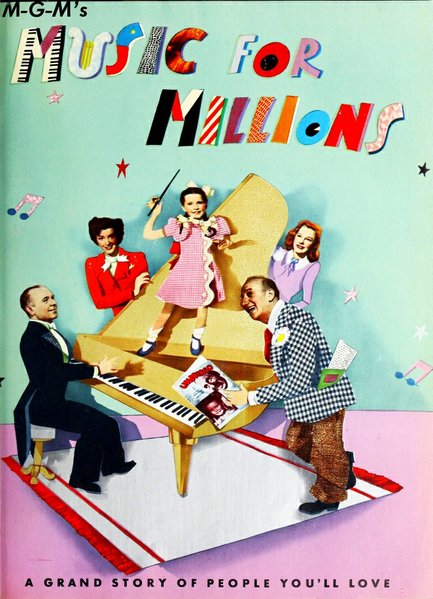 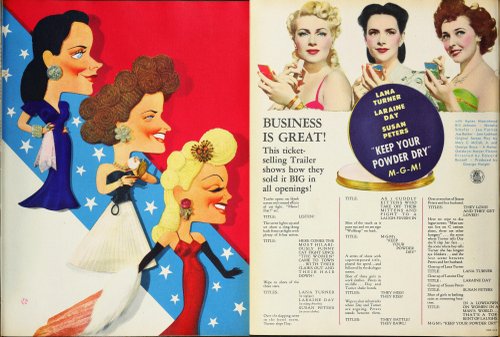 THE FILM DAILY - March 22, 1945. Susan Peters, Laraine Day, and Lana Turner in Eddie Buzzell's "Keep Your Powder Dry." Never saw it. Have to save something for my death bed. 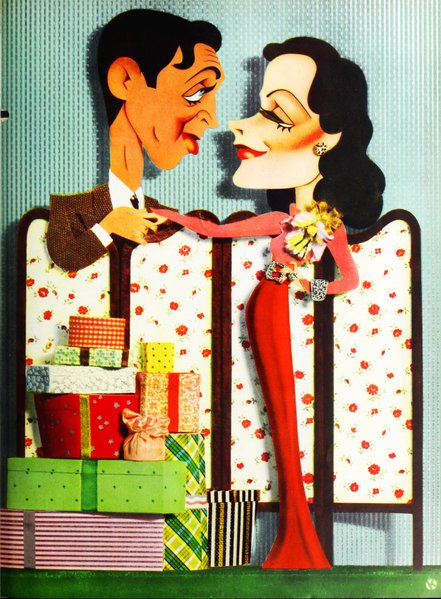 THE FILM DAILY, February 13, 1941. The "Green Card" of its day, starving author, Jimmy Stewart, enters into a marriage of convenience to help Viennese refugee, Hedy Lamar, gain US citizenship in Clarence Brown's, "Come Live With Me." 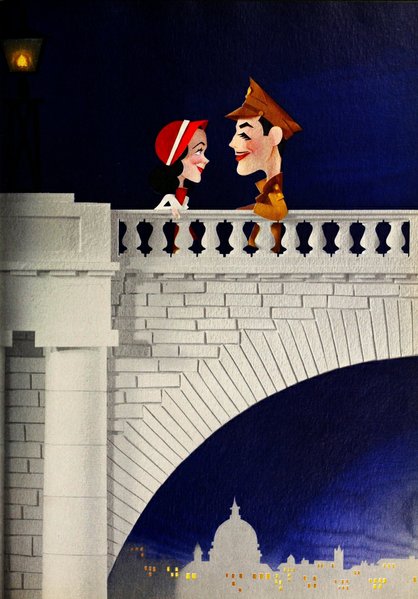 THE FILM DAILY, April 14, 1940. According to IMDB, "Released a few months after the invasion of Poland, and in the middle of the Blitzkrieg, this is likely the earliest Hollywood film to include the Second World War in its plot." If only this telling of "Waterloo Bridge" was as memorable as James Whale's 1931 masterpiece (and the invasion). For what it's worth, both Leigh and Taylor considered this their favorite film.

THE FILM DAILY, June 7, 1945. Esther Williams was the only actress to have a genre all to herself. Her water ballets were extremely popular -- "Thrill of a Romance," her second of five films co-starring Van Johnson, was the 8th highest grossing film of 1948. By today's standards, only one person can revive the Aquacade: Aquaman! 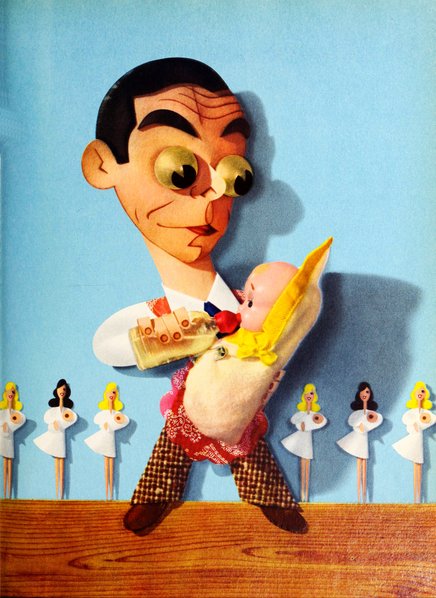 THE FILM DAILY, April 18, 1940. With five daughters to his (and wife Ida's) credit, one of the running gags in wildly popular radio and movie personality Eddie Cantor's repartee was his inability to father a son. By all accounts, Busby Berkeley's "Forty Little Mothers" is a dramatic tale of a group of spiteful schoolgirls who gang up on an unemployed teacher and the abandoned kid he took in. 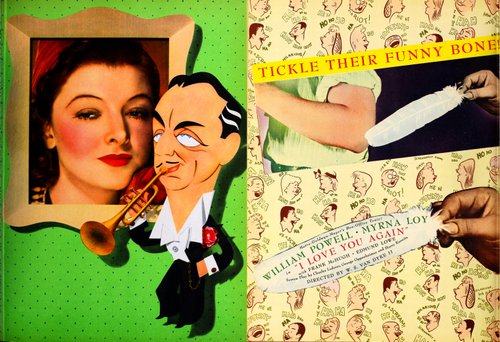 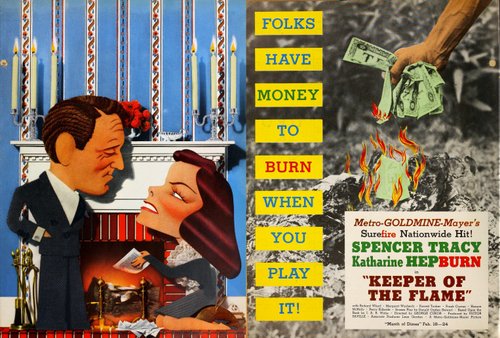 THE FILM DAILY, February 18, 1943. While on his way to a screening of the Hepburn & Tracy dud, "Keeper of the Flame," Van Johnson was involved in a smash up that left him with a metal plate in his head. That trivial tidbit is more interesting than anything on display in this, one of the rare melodramatic misses from director George Cukor. 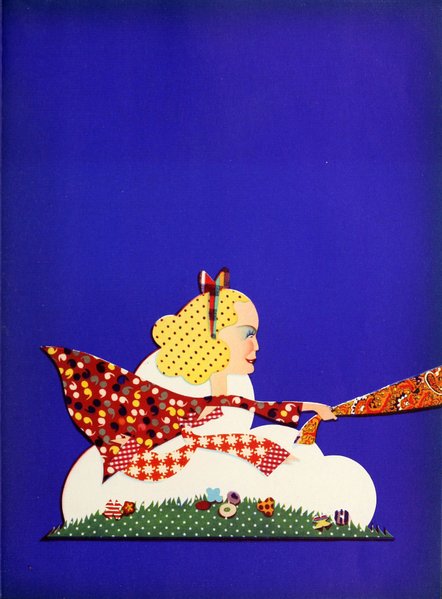 THE FILM DAILY, April 30, 1937. The first of a four page spread for "Woman Chases Man," a screwball comedy produced by Samuel Goldwyn and directed by the relatively unknown John G. Blystone ("Our Hospitality," "Block-Heads," "Great Guy"). I'll watch just about anything with Miriam Hopkins and Joel McCrea. Time to do a little more research into this one. 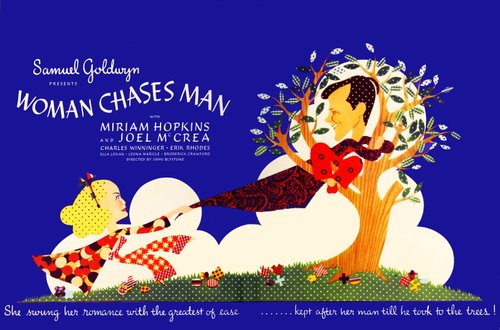 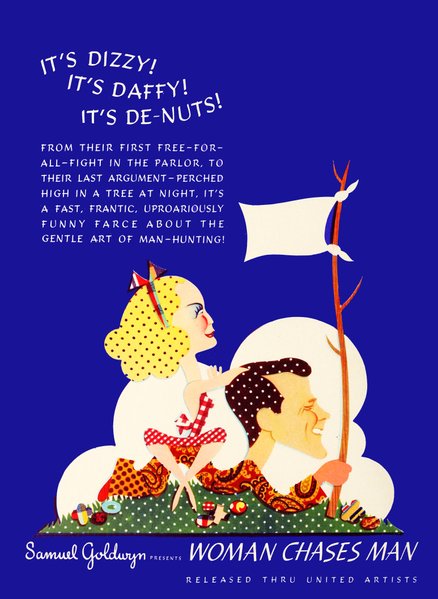 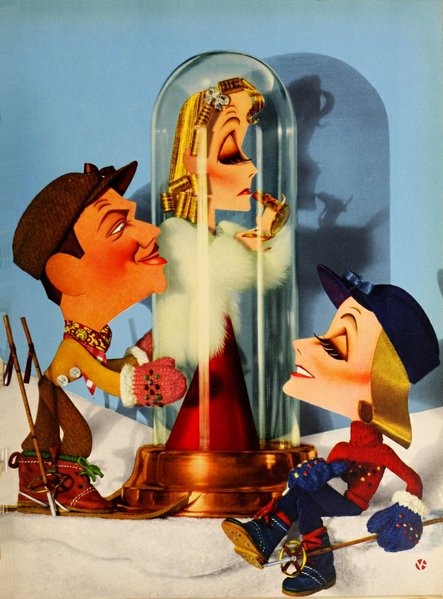 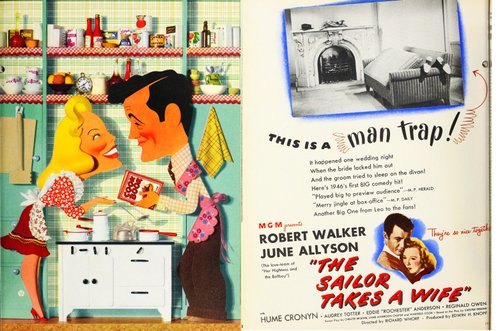 THE FILM DAILY, February 5, 1946. Back in the day, Hollywood studios were releasing on the average one movie a week. That accounts for fluff like Richard Whorf's "The Sailor Takes a Wife" starring June Allyson and Robert Walker. 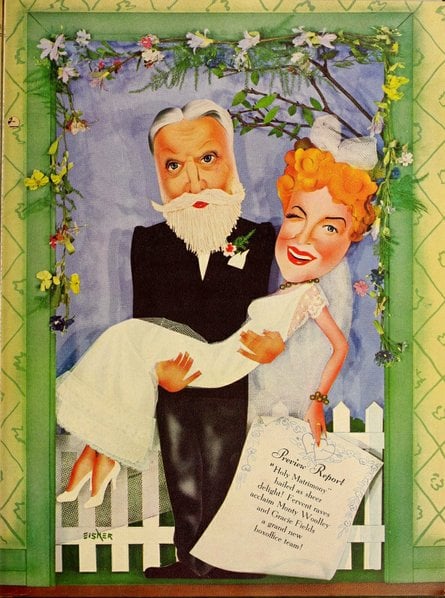 THE FILM DAILY, August 24, 1943. GOTCHA! This is a rare Kapralik knockoff for the 20th Century Fox comedy, "Holy Matrimony" starring Monty Woolley and Gracie Fields. Simply signed, "Eisner," it's not the scrawl one normally associates with cartoonist Will Eisner. Can anyone help me out?

The Best for last: Frank Borzage's The Mortal Storm:

Of all the M-G-M films to be given Kapralik's playful, shadowbox treatment none are more unlikely than Frank Borzage's dead serious anti-Nazi melodrama, The Mortal Storm. What laughs there are to be had are all in my mind. It's difficult for me to keep a straight face watching all-American heroes Robert Young, Robert Stack, Ward Bond, and Dan Dailey playing for the other side, sporting armbands and giving the old, "Sieg Heil!" And wait until you hear Young punch, "It was my doo-ty! Knowing how much I adore this film, I bear the brunt of shame laughing when I do. In this case, consider it my doo-ty!

James Stewart and Margaret Sullavan star as doomed lovers, fighting to escape Austria via the Karwendel Pass, knowing full well the chances of ever returning their once tight-knit family to its senses. Directed by the cinema's arch romantic, Frank Borzage, the last shot could be the most heart-wrenching, poignant image ever committed to film. After an Amberson's-worthy tour of their deserted home, the camera pulls out the front door and rests on the dead lover's footprints as they gradually fill with gently falling snow. Fade to black. Watch for it on Turner. Bring Kleenex. 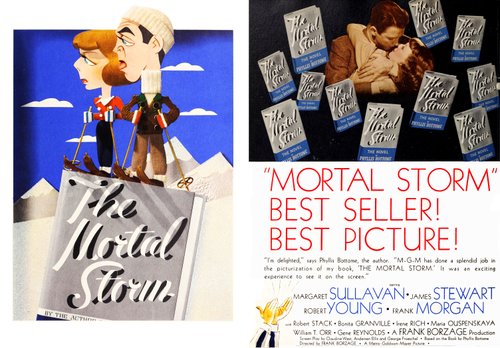