Gatz, Jay Gatz. He couldn't have been more Jewish had his parents named him Israel Hebrewstein. 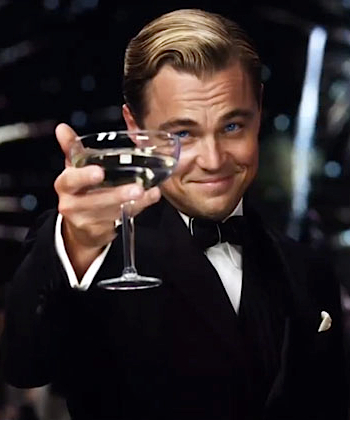 Matthew drew review duty, but I couldn't resist chiming in. I could be wrong, but my high school English teacher taught her students that the reason F. Scott Fitzgerald had Jay Gatsby change his name and hide his heritage was in order to assimilate. When Tom Buchanan (Joel Edgerton) refers to Gatsby as being a member of "kike" Meyer Wolfsheim's "bunch," he doesn't just mean the mafia.

This is Hollywood's third unsuccessful stab at bringing Fitzgerald's apparently unflimable novel to the screen. Actually, it's the fourth if you count the long lost 1926 version starring non-Landsman Warner Baxter. At least Al Jolson, Jerry Lewis, and Neil Diamond had the lack of foreskin needed to convincingly make it as Jazz Singers. (We don't count Danny Thomas.) Each time Hollywood manages to find the most goyisha kop actor on the lot to star as Gatzby.

Alan Ladd, the dullest, most unnecessary dialog provider the star system ever fabricated, as Jazz Age Jay? What synagogue did he spend the High Holy Days in? Robert Redford? I doubt he ever read the book! In his defense, the Sundance kid would sooner get circumcised than alter his haircut to fit the period.

And now Rebbe Lenny, who actually does quite well, give or take a dozen "old sports." But I still have to question why they didn't remain more faithful to Fitgerald's vision by casting someone more -- how you say, ethnic? -- like Adrien Brody. Oh, yeah. It's a Baz Luhrmann production. Forget I asked.

On the plus side, the CG linen postcard backdrops are pleasing to the eye and to his credit, this time Luhrmann didn't edit a picture in a Cuisinart. One more Gatsby gripe: Clutch Cargo had a wider range of facial expressions than Toby Maguire. At least the corners of the Synchro-Voxed cartoon character's candy box red lips aren't always curled downward at the corners. Acting as narrator, it's more grating every time he opens his mouth, as Maguire's consummate brand of bland persistence slows down every frame in which he appears.

Great write-up. Not sure I agree on Gatz being a Jew. I'll have to revisit the novel. I loved that you wrote "give or take a few dozen 'old sports'." Awesome!

As one who hales from the Midwest, grew up in Minnesota and has relatives who still farm in North Dakota, I would have to say that the "Gatz" name is likely to refer to someone from any of the German-speaking parts of Europe. There are many people who are descended from Germans, Austrians, "Bohemians" (yes, and it isn't a reference to an artsy lifestyle!), etc. Rather than his character Jay Gatsby being a Jew who wants to assimilate, I think that Fitzgerald was drawing upon his own dreams of wealth and success.

Transferring those dreams to the son of homesteaders, who remade himself, as Fitzgerald remade himself from the Midwestern boy into the world traveler and author, at home in the most glamorous of surroundings.

There are many English names (possibly originating in the Dane Law areas) that end in the '-by', as there are Scandinavian names, as it designates a dwelling place, probably from Old Norse. Overby/Overboe, Nordby, take my word for it, that suffix is fairly common in the upper Midwest. All of which Fitzgerald would be familiar with, having grown up in St. Paul, Minnesota.

Fitzgerald had a great ear for lyricism, the ability to almost undersell a scene or concept, so that it just seems like a good read, when it is quite a bit beyond that. His elegance in syntax and word choice is phenomenal. His ability to create worlds the reader comes to know is a great gift.

Fitzgerald the writer becomes almost without ego in "The Great Gatsby". Cerebral immediacy of story line. Not that easy to do.

Which brings me to Lurman's film, which I enjoyed very much. However, I must mention that the depiction of the North Dakota farm was ludicrous in the extreme. (Lurman may have taken that concept from footage of the Oklahoma dustbowl in the twenties...it is very unlike what a North Dakota homestead would have been around the turn of the previous century.)

Far too flimsy and ramshackle, as no one would have survived winter in anything like that! Lurman could have shown a sod house and it would have made sense, as homesteaders did live in them until they could afford to build a house. The wooden barn would be built before the house, as that was critical for the work at hand and the completion of the claim.

At any rate, that's my small quibble with a pretty good version of Fitzgerald's work. Overall, Lurman does go big and splashy.

I think Scott Marks is correct. I have a privately printed autobiography by one Gertrude Stein (no relation to Gertrude Stein) who grew up in a tiny town in North Dakota where her father, although not a rebbe, was the one to convene a minyan of about eight or so Jewish men drawn from miles around. She was eventually sent to a boarding school in Minneapolis, where the idea of someone being Jewish was inconceivable and she was constantly having to prove she was without horns and a tail. So, there were Jews in North Dakota. Not farmers, necessarily (her dad owned the General Store). This Gertrude Stein was born in 1913. The title of her book is "Little Kosher House on the Prairie."

It's tough being a Jew! And Redford refused to change his hairstyle because it covered his horns.

Alas, Jew or Not Jew says: not a Jew.

Also, there is at least the implication that Wolfsheim is using the fair-haired Gatsby to infiltrate WASP society - I think he's a goyim tool, not a fellow Jew.

Plus, Fitzgerald's overriding thematic concern was class, not race. The difference it made when you were born into money.