The enormously appealing Craig Robinson makes the leap from second-string relief in raunchy comedies to top billing as the Ben Stiller substitute in this Tyler Perry-approved sitcom riff on Meet the Fockers.

Robinson stars as Wade Walker, an affable loser who fancies himself a musician that makes a living singing songs about piss at children's parties. The film opens with Robinson serenading a group of kids with the kidney-tapping ditty, Speak It (Don't Leak It!).

The hits don't stop there. What's most unexpected about an all-black Fockers rehash? Other than a group of immensely talented performers wasting their time and considerable talent on what amounts to little more than a TV movie of the weak, the only surprise Peeples has up its sleeve is of a musical variety. At one point Robinson, David Alan Grier, S. Epatha Merkerson, and virtually ever other major player burst into song.

Robinson arrives unannounced at his girlfriend's (Kerry Washington) affluent family reunion in the Hamptons. Every year the "chocolate Kennedys" meet in Sag Harbor for a festival celebrating Moby Dick. Peeples does have at least one thing in common with Melville's classic; most people won't be able to see it through to the end.

All Peeples hide a deep, if not single-faceted secret that Robinson is quick to discover: Dad (Grier), a dour-faced Federal Judge, loves to swim naked with whales; mom (Merkerson) was former soul queen, Lady Duke; sis (Kali Hawk) is a closeted CNN reporter; and little brother (Tyler James Williams) a budding kleptomaniac. Leave it to an unpolished outsider who, in the span of a weekend retreat (and in order to form a more perfect union), unites the Peeples.

One by one, and rather mean-spiritedly, writer and first-time director Tina Gordon Chism reduces her players to bumbling stereotypes. Merkerson's recovering alcoholic lovingly drools over a bottle of wine her future son-in-law unknowingly brought as a gift. Wade's heart takes a beating when he learns that after a year together, his main squeeze had never once breathed his name to her parents. Her breast implants and a list of former lovers/father figures also come as news to her beloved.

Having not yet seen Baz Luhrman's grated Gatsby, it's difficult to imagine this tale of an outsider who wants nothing more than to belong being any worse. If nothing else, it's almost an hour shorter. 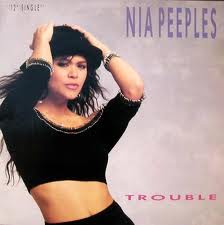 No part for Nia?

I believe a SPOILER ALERT was needed in here. Weren't we supposed to wait until the end to discover about the naked whale swims? Hahahahaha. Horrible movie.

How can you spoil something that's already this rancid? Besides, I didn't spoil it for you, fellow sucker!