World War II had come to an end and the Korean war was just ramping up, but the main motivation behind this propaganda piece was to satisfy R.K.O. studio owner Howard Hughes flying fascination. In 1949, Hughes began production on Jet Pilot, another aerial blockbuster. Hughes obsessed over the second unit shots for so long that by the time he was satisfied, aviation technology had rendered his vision obsolete. Undaunted, Hughes decided to reshoot the flying sequences and the film didn't see a projector's arc until 1957. By the time the cute Cold War comedy was released, topical humor and the way America viewed the growing Red menace had changed, instantly branding the picture dated and obsolete.

Other than Macao, Nick Ray and Jet Pilot director Joe Von Sternberg had one thing in common: they were working for Mr. Hughes and the checks were as good as they were steady. Ray possibly undertook the project in part as a preemptive defense against HUAC who viewed him as a left-leaning, Tinsel Town liberal. They were right, of course, but Ray never went down for them. Undoubtedly Ray and Robert Ryan, both leftist liberals, locked horns with the Duke and his favored G.O.P. co-star Jay C. Flippen. Sadly, very little of their off-screen tension found its way into the finished product. 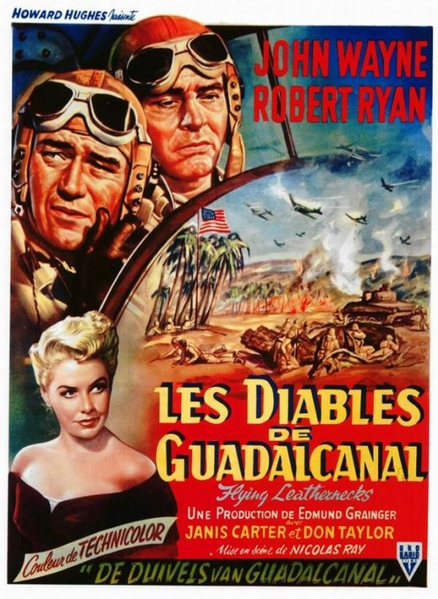 The production was one of the studio's first shot in Technicolor. R.K.O., a second-rate lot with first-rate talent, was unable to spend the necessary money to recreate their bleeping tower in three-strip. What follows is pretty much close-ups of actors piloting rear-screen aircraft intercut with stock footage. In the air, archival footage eats up a good 10% of the running time. On the ground, the filmmakers don't have a story to tell. What is the objective of the film other than once again witnessing John Wayne win the war? The plot, what little there is, goes nowhere: Wayne's crew suits up, takes to the air, kills "Japs," and returns minus a co-star.

Cinematographer William E. Snyder was brought on board to photograph airplanes, not paint with light. The high key demands dictated by the lumbering three-strip Technicolor cameras were taken literally by Snyder and his crew: there's barely a shadow in this thing!

Normally a picture like this is populated with dozens of familiar faces, but even the supporting cast fails to deliver. Don Taylor's contributions to cinema have always been negligible at best. Not being a fan of Gunsmoke, a Milburn Stone appearance meant nothing. Jay C. Flippen serves up what little comic relief there is. Only Dick Wessell and Adam Williams brought smiles to our faces. Wessell makes a pre-Chopper Kane (A Fling in the Ring) cameo and Williams will always be best remembered as the "we'll laugh about it in the car" guy from North by Northwest. This was only babyface Williams' second role. To the best of my knowledge it afforded him about the healthiest amount of screen time he ever had. His character is introduced, familiarized, and done in before the first cue mark. 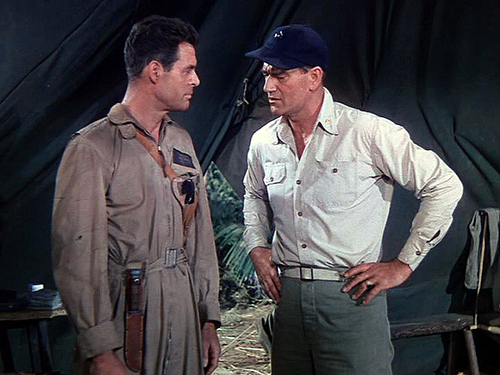 Major Wayne and Executive Officer Ryan eventually tangle, but it's pretty tame stuff. Ryan resents Duke for forcing his men to take an up-close look at a comrade's corpse while Duke gets pissed over Ryan's inability to send soldiers to their deaths. Guess who wins in the end? Ryan, in his subdued, nice guy mode isn't given much room to vent. Duke is sent stateside to man a desk and nurse a broken arm while Ryan takes command of the troop at the fadeout. How many reels before the strain of command turns him into someone akin to Crossfire's "Monty" Montgomery?

On a note of violently insane self-indulgence, I once again proved my superior prowess at spotting unheralded character actors in the unlikeliest of places. Barry Kelly appears briefly as a Brigadier General, and though unable to summon up a name, his face signified only one thing. Remember the opening dance ensemble in West Side Story? There is a traveling shot of the gangs pirouetting past a row of political placards. Barry Kelly is the candidate pictured. Damn, I'm good! Alzheimer's stay away from my door!

Scanned from a 1951 LIFE Magazine I own: 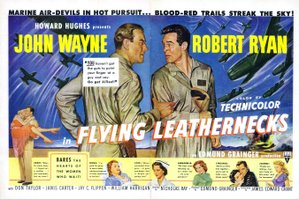