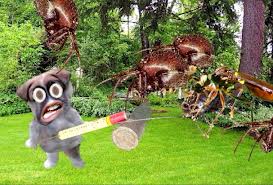 PassmoreLab, the San Diego-based 3D production studio, has teamed up with indie-punk-rock outfit Osaka Popstar for a stereoscopic 3D version of the band's "Insects" music video. The song was written by the Kids of Widney High, a music group composed of disabled students from the special education J.P. Widney High School in Los Angeles.

The video is a product of producer John Cafiero (Osaka Popstar), and British cult animator Joel Veitch, known his series of "Rather Good" videos. The cartoonish, yet photorealistic, animated music video consists of a militia of punk rock puppies, armed with guitars and walls of amplifiers. 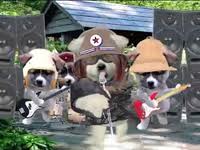 Osaka Popstar, which has included members of the Misfits, the Ramones, and Black Flag, previously tapped Passmore for their "Wicked World" video, a product of Cafiero's collaboration with Japanese cult animator Mari-Chan.

With the recent growth of 3D screening platforms -- theaters, television, mobile devices -- PassmoreLab has staked out a solid niche. "Our 3D production style works well for music videos and we enjoyed working on the 'Wicked World' project with Osaka Popstar," says Greg Passmore, President of the company. "We saw 'Insects' as a wonderful opportunity to jointly promote the incredible special education program at J.P. Widney High School [KOWH]."

Such notable musicians as Smokey Robinson, Jackson Browne, Marilyn Manson, and the Beastie Boys' Adam Horowitz have all cited themselves as fans of the KOWH. The band has released several albums and a biographical comic book and are chronicled in the feature-length rockumentary Act Your Age: The Kids of Widney High. 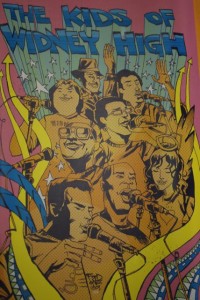 Popstar poobah John Cafiero says "It's genuinely satisfying to see Osaka Popstar's cover of 'Insects' turn new audiences on to KOWH and their work. I've been a longtime fan, so it was great fun covering the song with a different sonic approach. When we charted on alternative radio with the single, it was like a personal victory. I'm a huge aficionado of what's commonly known as 'outsider art' and, from my perspective, outsiders are insiders. That's been a punk credo since the initial movement of the 70's."

"We brought something to a wider audience-in a punk rock Trojan horse-that might not have been given a chance by some otherwise. Many people were turned on to something new without even realizing it initially. When they delve further and learn the back-story, they appreciate it even more, and I find that fun and inspiring."

Both "Insects 3D" and "Wicked World 3D" are available for distribution on multiple 3D platforms including mobile devices, video on demand, television broadcast and theatrical. All of the producer's net proceeds from the distribution of "Insects 3D" will benefit J.P. Widney High School.

The time seems ripe for such distribution of 3D films content, especially since last year's release of the first 3D-enabled smart phone, the HTC Evo 3D. Says James Humann, Executive Producer with PassmoreLab, “With the recent launch of the Nintendo 3DS and with LG’s Thrill and Samsung’s Galaxy 3D hitting the U.S. market...the entire music industry is excited about the growing opportunities to deliver 3D music videos via ‘glasses-free’ handheld devices. Band managers and labels are seeing 3D as a visual innovation that can transform a music video from primarily a marketing device used to promote record sales into a legitimate source of consumer entertainment.”

The Bay Park–based PassmoreLab was founded in San Diego in 2003 by company president Greg Passmore. "One of the really great things about the 3D conversion we're doing," he says, "is that a lot of content that otherwise may be seldom seen is now getting a new and fresh look. It also creates a more immersive experience for the viewer.”

Last year, Memphis, Tennessee teen pop duo Memphis High had one of its videos converted to 3D by the company. “Criminal Love” features 16-year old Witt McKay and 17-year old Grant Vogelfanger in full stereoscopic 3D amidst bustling traffic, hoisting signs up to passing cars and wooing girls on the beach. The video followed up the company’s 3D reworking of Linkin Park’s “Iridescent,” from the Transformers: Dark of the Moon soundtrack. Passmore also worked with Chicago rock band Plain White T’s on a 3D conversion of their “Rhythm of Love” video, off their Wonders of the Younger album.

The 3D music video is highlighted on a Mitsubishi 3D demonstration reel, used (potentially) in over 11,000 North American retail locations, and the company also produced a video with Slash, with all stereoscopic aspects produced in San Diego. The company’s multimedia 3D production studio now boasts an extensive library of 3D content for licensing. One of Passmore's early on-site creators was famous San Diego neighbor Michael Page. Though best known for his stint with Iggy Pop (1979 to 1984), bassist Page has also performed and recorded with David Bowie, Chubby Checker, Jerry Lee Lewis, and New York Dolls guitarist Sylvain Sylvain, with whom he formed the band Criminals. “Iggy introduced me to Johnny Depp around ‘92,” says the Kearny High graduate (1968), “and Johnny put me in charge of throwing a band together with him, the Vipers. However, that project ended up clashing with his movie shooting, so that’s when I bailed on live road gigs in favor of working at home, scoring for films.”

Page, who grew up in North Park, lives near Banker’s Hill. “We teamed up with rock photographer Bob Gruen,” says Page, “to convert his well-known iconic images to a format that can be viewed on stereoscopic displays.”

“It would be incriminating to say how far back I go with Bob, so let’s just say that we’ve both seen a lot and are blessed to be alive to tell about it,” jokes Page. “We had the recent opportunity to bring Bob from New York to the lab in San Diego, to see what we were cooking. I knew he would flip, and boy did he ever! As I recall, after his initial shock reaction at seeing our work, his first whispered words were ‘I’ve seen the future.’”

Bassist Page prefers his current gig to the rock and roll lifestyle. “It’s a lot less dangerous than dodging bottles with Iggy Pop,” he says.

Another 3D Passmore video was done for glam act Semi Precious Weapons. “Including the champagne and a gallon of gold body paint, it ran about $30,000,” says Page.

“We shot the entire project in one long day but spent a considerably longer time building the sets and even longer time cleaning up afterwards. The cost for a 3D production is significantly more than 2D, partially due to the complex editing processes.”

PassmoreLab didn’t recruit a local band for the video (which included “taxidermy and glam ghouls spewing metallic body fluids,” according to Page) but used a New York City band, the Semi Precious Weapons.

“The band was awesome and ripe for 3D,” says Page. “The front man Justin is so full of energy and so animated...they seemed to muster up an artistic concoction that had similar tastes and sensibilities as my old cronies the New York Dolls, sprinkled with a bit of Iggy Pop flavoring.”

“Magnetic Baby” was shot in San Diego, in both 3D and 2D format. “We are interested in releasing the 3D version in Japan, where they have been successfully broadcasting 3D television for a while now.”

So why make the investment? According to the titular head of the company, “PassmoreLab is in the business of producing films and as part of this function finances and performs production services in exchange for back-end revenue off the resulting content.”