Fans with short attention spans will applaud director Olivier Megaton’s inability to hold an image on screen for more than 10 seconds, but devotees of the original, of which I am one, will wonder where the thrills went in this sub-standard remake in sequel’s clothing. Instead of victimizing Maggie Grace, the father of the men Liam Neeson killed in part one seeks revenge by kidnapping her parents. Talk about a gang that can’t shoot straight, the inept baddies don’t bother to frisk the chained Neeson to find a phone concealed in his sock. He then proceeds to make a call (on speakerphone, no less) while a presumably deaf guard is seated within earshot. The laughably bad parental dialog exchanges -- the retired CIA operative has been turned into a comical daddy Focker-type bent on warding off his daughter’s potential suitors -- appears to have been lifted from Father Knows Best reruns. One inventive torture scene where they slice a character’s neck and hang her upside down for the blood to slowly drain, does not a successful thriller make. Taken to the cleaners is what you’ll be if you waste time on this Megaton bomb co-scripted by Luc Besson, deep in his Xerography mode. With Famke Janssen.

Not even a 0.5 star for Famke Janssen? C'monnnnn! 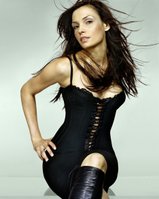