Have you ever been involved in a movie theater bomb scare? A screening of The Birth of a Nation that I helped to arrange for a college film society in Chicago was met with threats of violence. (The caller said that a bomb had been placed in the women's restroom.) Two off-duty Chicago policemen did everything short of frisking the audience as they entered.

The premiere of The Last Temptation of Christ brought out every religious nutjob in the Windy City. The Biograph Theatre had received so many threats they were forced to position four armed security officers in each corner of the auditorium during every showing the day it opened.

The closest I ever came to feeling a threat to my life while watching a movie had to do with a canister of fireworks some goon set off during a July 5, 1975, presentation of Clint Eastwood’s Bronco Billy.

Needless to say, all of the above mentioned incidents ended peacefully and took place long before some erudite Bozo-haired fanboy decided to make a name for himself by killing 12 people and wounding 58 others at a theater in Aurora, Colorado.

It wasn't long before the diseased copycat cockroaches began crawling out of the tivoli lights, causing more panic among moviegoers. Last Saturday night, during a screening of The Dark Knight Rises at AMC Mission Valley, a San Diego audience had a joker of their own to contend with.

Approximately two hours into the 8pm screening, the houselights went up and an employee entered the auditorium asking that the theater be cleared. U-T San Diego staff reporter Jonathan Horn was in the audience. According to the paper, "A worker was later overheard saying that a suspicious-looking bag had been spotted inside one theater showing The Dark Knight Rises."

The interruption lasted five minutes before the audience was allowed to return and finish the picture.

I love it when art shows that is still has a capacity to piss people off, but what happened in Colorado was not the work of an artist. The movies are our communal home and I'll be goddamned if I'm going to let a few headline-hogging sociopaths ruin it for the rest of us. It's bad enough that most of what shows on-screen is a bomb. We cannot allow threats and violence to keep us from going to the movies. Now, more than ever, is the time to get more out of life...go to a movie! 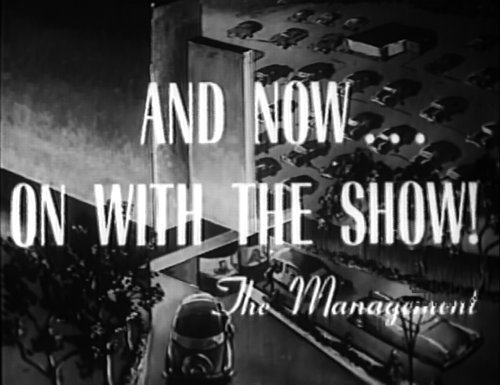