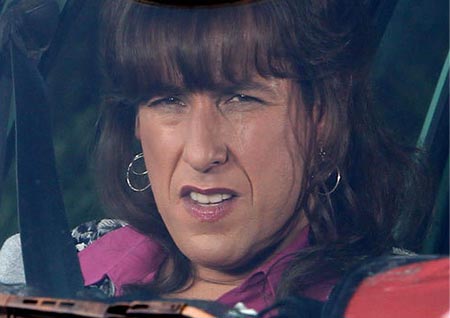 Why didn't they just hire Mayim Bialik to star as Jill?

It was the first time in the 32-year history of the Razzies, an organization dedicated to honoring the worst cinema has to offer, that one picture swept all categories.

It's customary for me to trek all over the county to watch movies, but Jack and Jill was one pail of crap I wouldn't go across the street let alone up a hill to fetch. Lickona lost the bet and drew review doo...duty for this one.

I'll willingly succumb to The Smurfs, Disney's Prom, War Horse, and countless other retina-scalding monstrosities, but the very thought of Sandler coming around to drag comedy 10 years after Milton Berle's death is bone-chilling.