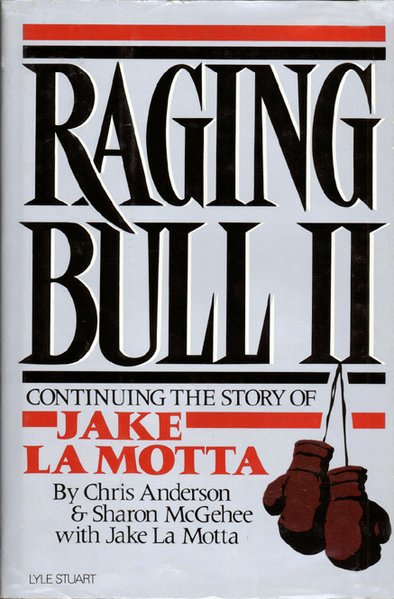 The Hollywood casting net is being thrown far and wide to find the right variation of chooches, scooches, mooks and mamalukes to star in Raging Bull II.

Based on the book by Chris Anderson, Sharon McGehee and Jake LaMotta, Raging Bull II presents, "a unique combination prequel and sequel that explores 'before the rage' and 'after the rage' of the world of middleweight boxing champ Jake LaMotta's tumultuous life and times."

That's Hollywood Pictures is the brain trust backing the production to be directed by Martin...Guigui and co-written by Guigui and Rustam Branaman.

Marty, Bobby, and Irwin were all unavailable for comment. I left a message for Joe Pesci with the manager of the Pro Shop at the Brooklake Country Club in Florham Park, New Jersey, but the stugatz never returned my call.

Below is a list of all the plum parts they're looking to fill. The Los Angeles shoot is scheduled to begin in June or July. I'm thinking the role of Aaron Levy would best suit me. Where do I send my headshots?

[ YOUNG JAKE LAMOTTA ] To play 14-20 years old, and already a tough bare knuckles fighter. He takes his father's frequent beatings without a sound and makes money fighting much bigger opponents in back alley fights set up by his drunken, abusive father. Please submit over 18 to play younger OR emancipated.

[ GUISSEPE LAMOTTA ] Portrays 40s-70s, Jake's father, a tough-looking Italian man, he's a mean drunk who handcuffs and beats his son. He sets up the back alley fights with Jake and much older, stronger opponents. Later he refuses to help the grown-up Jake when he asks for money. Late in life, a frail old man, he reconciles with Jake just before his death. STAR NAME ONLY!

[ SALLY CARLTON ] 30-40, Jake's girlfriend and later his wife and Lisa's mother. After years of dealing with Jake's drinking and womanizing, she finds Jesus and takes Lisa with her to Florida, leaving Jake alone in New York. STAR NAME ONLY!

[ FATHER O'DOULIN ] 60s, Head Master of the reform school, he tries to force young Jake to fellate him and gets punched in the crotch by Jake. Recognizable names: Great Cameo Role

[ BARTENDER ] 40s, burly and muscular but with a healthy beer belly. He refuses to serve Guissepe and Jake because Jake's clearly underage. He fights Jake in the alley behind the bar, choking him to win the fight when he can't knock him out fairly.

[ ASSISTANT D.A. BONOMI ] 40s, a thin, rat-like man, he grills Jake before the Kevauver committee on organized crime in boxing, getting him to tell more then he should.

[ LISA ] 16, Jake's estranged daughter, a pretty girl, she stays with her father after Paco runs out on her. Paco comes back and gets her high on PCP's and she flips out and cuts Jake with a knife. Later, Jake helps her straighten herself out and sends her back to her mother in Florida.

[ PACO ] 19, Cuban, long hair, wearing a hippie sort of Jacket, Lisa's "old man," 'til he dumps her then comes back and gets her high and crazy on PCP's. Jake throws him out, again, and threatens to kill him.

[ LENNY ] 50s, a smarmy guy, he's Sally's boss, until Jake accuses him of sleeping with Sally and threatens to beat him up.

[ DOORMAN ] 50+, Male at a strip joint, he's a large African American guy and an ex-heavyweight fighter.

[ IRISHMAN ] Huge, at least six-five, gets in a scuffle with one of the dancers then tries to fight Jake, who knocks him out.

[ DEBBIE FORRESTER ] Early 30s, very striking, and very rich, Jake sees her in the park, reading a book, and picks her up. 6 months later, she's his fifth wife, until she gets fed up with his drunkeness.

[ LILLIAN FORRESTER ] Late 60s, Debbie's mom, a refined woman who has become accustomed to the better things in life.

[ AARON LEVY ] 40-50s, buys Jake a drink, then reveals he's the kid Jake thought he killed in a back alley fight when he was a kid.

Very curious... we could cast this movie very easily... But first, we need to see your head shot for the Aaron Levy role. 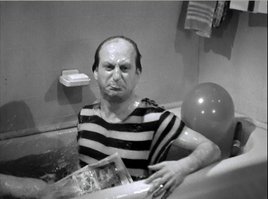 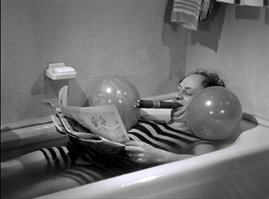