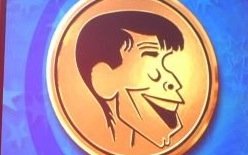 The Jerry Lewis Telethon That Never Was

The catch-phrase for this year’s Not So Extra Special Special was “Make a Muscle for MDA!” This after the organization decided to hamstring celebrity strongman Jerry Lewis.

You can take the man out of Chicago, but you can’t take the WGN feed of the Jerry Lewis MDA Labor Day Telethon out of the man. I rescinded my vow to boycott the ‘Thon and dutifully tuned in to catch the 3 pm kick-off. Before the show hit the 60-second mark, Dean Richards, WGN entertainment and lifestyle reporter (and Chicago’s Very Own) made it clear: “Jerry Lewis will not be part of the Telethon this year.” Richards also knows “for a fact that MDA had intended on honoring his many, many, many years of hard work putting this Telethon on the map. Plans were actually underway for it and then something happened. Nobody except Jerry and MDA know what happened to cause the sudden split.”

The word “split” hounds Jerry Lewis closer than the wheel that follows the foot of the suffering ox. Unlike his first well-publicized “divorce” from Dino, in which friends were divided into camps (you never saw Bob Hope on “The” Telethon), few, if any, are likely to side with the Muscular Dystrophy Association’s decision to make this year’s annual fundraiser The MDA Labor Day Telethon Without Jerry Lewis!

After Richards' opening confirmation of Jerry’s absence, I let the DVR do the work. It wasn't until Monday afternoon that I got around to watching and making notes.

It was business as usual for Chicago’s SuperStation -- minus hourly bumpers promoting the station's upcoming fall lineup of reruns and the obligatory charity-displacing Cubs game that tended to shift focus from beneficence to corporate greed. Once again, co-host and former Olympic gymnast Nadia Comaneci’s fractured readings of even the simplest donor names was mucous to my ears. She is the only person on the planet for whom “Smith” is a polysyllabic turn of phrase. The threadbare (even by ‘GN’s standards) set consisted of a handful of 20-foot tables draped in colorful cloths. It looked like a VFW Banquet Hall’s stab at a picked-over Liberace garage sale. Rehearsing the last laugh he'll have on MD.

As of today, Jerry has neither publicly commented on the separation, nor has he given any verbal or written indication that he voluntarily “retired” as Telethon host and Chairman of the MDA. He has frequently joked that he wants to break George Burns' (not Bob Hope's) record, live to 101, and in that time do all he can to help combat and cure neuromuscular disease.

Before taking a catnap last year, Jerry temporarily handed the reins to Lythgoe. "I didn't realize then," the smarmy Brit confessed, "that he was contemplating retirement." Neither did Jerry, because as far as Lewis and the MDA were concerned there never was any thought given to stepping down. All the talk of Jerry’s retirement stemmed from this post on MDA.org: “"Lewis has completed his run as its national chairman...Lewis and MDA announced his retirement as host of the MDA Labor Day Telethon."

What is this “we” nonsense? His is one mouth you can’t put words into and no one other than Jerry calls “Cut!” on the set of a JL production! So why do Lythgoe, and particularly Jann Carl, who for years pledged her allegiance to Jerry, insist on following the party-line by citing the reason for the host's absence as retirement? (It almost blew my mind when a long shot revealed a poster of Lythgoe making a muscle on the wall where a giant photo of Jerry and MDA National Goodwill Ambassador Abbey Umali once hung.)

Speaking on behalf of the MDA, Carl said, “His kids are now our kids.” With nothing more than a dissolve of background photos, the fleeting, sincerely-insincere tribute to a man who dedicated almost 60 years of his life to raising $2 billion to help rid the world of this insidious disease ended.

Had the MDA marketing and promotions department played their cards right, and presented this as a farewell tribute to the man that "brung ‘em," every big name in showbiz would have stopped by to fawn at His feet and proclaim everlasting buddyhood. Instead, we’re stuck with the usual parade of ventriloquists, gymnasts, Grand Old Opry remote segments, and a “tribute” to Sinatra so lame as to half expect Frank to rise from his grave and kick the snot out of the two punk hoofers whose stumbling was backed by his elegant phrasing. Up with Voca People!

This year’s “Hope They Don’t Get A Callback” award goes to the musical group Voca People. Billed as, “friendly aliens from the planet Voca, somewhere behind the sun...where all communication is made by music and vocal expressions,” they’re either the albino version of Blue Man Group or out answering a casting call to play sperm in the Broadway musical adaptation of Woody Allen’s Everything You Always Wanted to Know About Sex...

Lythgoe, who bears an annoying resemblance to Barry Foster’s sleazy necktie strangler in Hitchcock’s Frenzy, brings with him an assortment of County Fair crooners (Jordan Sparks, Ace Young) as well as individual, pre-recorded video pleas from his show's celebrated team of hosts. (“MDA needs you, dog!”) I half expected the theme from A.I. to replace Smile. And speaking of "The" Telethon theme song, Il Volo, a group of Italian tenors (previous guests on Idol) who look like they’re just about ready to hit puberty, drop by to sing Smile. No mention is made of the fact that the song has opened the Telethon since its inception. Throughout the proceedings, Jerry remained the white, Jewish elephant in the room. I expect it from Teller, but Penn not mentioning Jerry came as a shock. The broads of The View were there and one could imagine the outspoken Ms. Whoopi leaping to her friend’s defense. Her freshly trimmed and arranged Shemp Howard dreadlocks was the only homage to a comic legend that I caught.

Harold Schaitberger, President of the International Association of Fire Fighters, was so fermished that he caught himself before referring to MD as MS. He pulled it together and by the end of the show, mustered up the courage to reference Jerry by name. When presenting Abbey with a final check, he noted that it was "one-dollar more" than last year's donation, a goal that Jerry continually strove for.

Sadly, "Where Are They Now?" segments are not synonymous with The MDA Telethon and it was wonderful to see how far 1994 poster child Kelly Mahoney has come, thanks to the work of MDA. The same goes for Abbey, 2011 National Youth Chairman Luke Christie, and Jerry's oldest "kid" Augie Nieto. If you don't pick up a phone to call in a pledge after hearing Augie's story of hope and survival, you're dead inside.

The most heartfelt tribute to the Lewis legacy came from long-time friend of "The" Telethon, Maureen McGovern. She spoke of "my forever hero" and how Jerry inspired her and so many others to get involved with MDA.

There were no "TIMPANIS!" to be called for and no numbers to change. The local affiliates had flat-screen tote boards, but aside from check totals, numbers were anathema on the national feed. Perhaps they feared a backlash, or that people would forget they had 6, not the customary 21 hours to pledge. It wasn't until the last few minutes of the show that it hit me, and the tears began to flow. A two-minute clip-fest of Extra Special Specials past -- showing JL posing with Telethon royalty like Frank, Sammy, Berle, Charlie Callas, Totie Fields, Rip Taylor, Charo, Mr. T, and especially Cornell Gunter -- hammered me harder than the final nail in a coffin. It's over. A tradition that I held dear had ended, and I was now free to leave my TV set and move about the city each Labor Day.

Visit the Telethon History page at MDA.org, and you'll find no mention of Jerry's name. As fellow Telethon-watcher Linda Stern noted, “Maybe Jerry will find another cause to link his name to for the next 85 years!” Same cause, different continent. Australia is the new France. I predict that before long Jerry will move “The” Telethon Down Under.

Talk about someone who will never walk alone: God Bless you, Jerry Lewis.

What the hell is wrong with the MDA? Having the telethon without Jerry Lewis is like the Yankees without pinstripes. As Sinatra said of love and marriage, "You can't have one without the other."

I think the way they have treated Jerry Lewis is disgraceful. A family member of mine watched the show this year and said there was something missing, and that the "tribute" was an insult. However, I participated in a Webathon put on last night by the www.laughfactory.com site where you could donate to the Jerry Lewis Award, a collection of money to be awarded to the researcher who has done the most towards a cure during the last year! So I could honor Jerry's contribution that way.

I have loved Jerry Lewis all my life and will continue to hold him in the highest esteem for his humanitarian efforts. I hope he goes on to his own projects now and does what he wants. We love you and thank you, Jerry!

Finally watched the Telethon off my TiVo - boy, does Dean Richards go right for Jerry's jugular! Still a little bitter after your snub from Jerry Deano?

Everything else here is spot on Scott - Nadia has fractured so many names over the years; she's on the Kupcinet plan!

Sure they raised $61M without a toteboard in six hours. My understanding was in years past, the toteboard was pledges only - not the big corporate checks from firefighters, 7-Eleven, and others.

This year, they threw all of it in one big six-hour crockpot and boy, we raised more than Jerry!

Jerry Lewis is the greatest human being that ever lived.

Many years ago, I was walking out of the Kona Kai Parking lot, and I spotted a guy standing there who seemed to know me and I sort of recognized him. I wasn't sure who it was, but by the time I walked past him, I realized he didn't know me after all, and I turned around and said "Hi, Jerry." He rewarded me with a dazzling smile and greeting, and a little bit of sadness, that he hadn't been recognized immediately. But he was still on stage. He used to keep his boat, I think "the Pink Pussycat"? there.

The boat is still docked in town, only now it's called Sam's Place in honor of the second Mrs. Lewis.