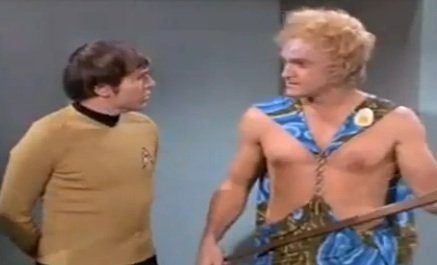 The Kentucky-born Napier served in the 11th Airborne Division before becoming a teacher. (What must it have been like to be seated in a classroom with Prof. Harry Sledge behind the lectern? I would have loved to have heard his chalk talk on Polish munitions.) Napier moved to Hollywood and landed bit roles in TV series (Mannix, Hogan's Heroes, Star Trek) before hooking up with Meyer for the first of four films together. Cherry, Harry, and Raquel is a minor miracle. Napier plays a racist border cop determined to keep American soil free of reefer and illegal aliens. (Provided they were born with cannonballs where breasts should have been, promiscuous bimbos of all races, creeds, and colors were more than welcome to stay.)

Legend has it that the lab destroyed much of the original footage leaving the film with a barely graspable narrative. Russ inserted voice-over narration and ample long shots of equally plenteous starlets cavorting in the all-together. Unwitting critics applauded Russ' audacious surrealism.

Napier went on to appear in smaller roles on Russ' two mainstream studio releases, Beyond the Valley of the Dolls and The Seven Minutes. It wasn't until SuperVixens, Russ' magnum opus and the first of his features where sex and violence became inseparable, that Napier answered his calling. He plays Harry Sledge, another corrupt cop with a fixation on busty babes. When ridiculed for his impotence by the pneumatic SuperAngel (Shari Eubank), he breaks into the bathroom, throws an electric radio in her tub, and proceeds to stomp her to death. The scene endures as the funniest parody of Hitchcock's often-imitated shower sequence in Psycho. Academy Award-winning director Jonathan Demme cast Napier as a square-jawed good luck charm in eleven of his films. He was the cop who "masked" Hannibal Lechter in Silence of the Lambs, a judge in Philadelphia, and a ticked-off carny in Beloved. My favorite bit in a Demme bit finds Napier as Howard Hughes' well-appointed Camel-buying (but not smoking) errand boy, who delivers the will to Melvin Dumar in Melvin and Howard.

With over one hundred mainstream films and television shows to his credit, Napier had long outlived his kinky past. He was 75 and the cause of death has yet to be released. My eyes lit up every time his name appeared in an opening credit crawl. He served us well and will be sorely missed.

I rode in an elevator with him at the American Film Market in Santa Monica a couple of years ago. He seemed to have shrunken in size (body wise) but he still had that ne'er do well grin planted firmly on his quadruple-Leno. He was the quintessential utility player in movies. Oh crap - I just made a sports reference. Mea culpa!

He was a fellow Kentuckian, and my face always lit up too when I saw his name in credits.

I first became aware of Charles Napier as Tucker McElroy, lead singer and driver of the Winnebago in "The Blues Brothers". His facial expressions as his out-of-control RV was about to drive through a barn are priceless.

If you can find a copy, Napier gives a great performance in "Citzens Band" a.k.a. "Handle With Care" (1977) as the Chrome Angel, a trucker whose life on the road catches up with him. Napier's first film with Jonathan Demme.

Another great character actor gone... RIP Chuck. Off to find a copy of "SuperVixens"!

You're killing me. I'd love to see "Handle With Care," again. In addition to Napier, it houses a terrific performance by another favored supporting actor we lost this year, Roberts Blossom.