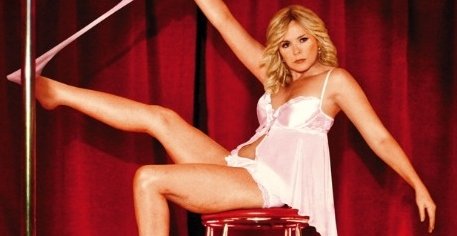 The keys to the kingdom were handed over to Spielberg and Lucas when they started trading mega hits back in the 70s. Since then mall theatres have become asylums for nerds and nine-year-old boys going on forty. The thought of yet another dweeb comedy doesn't sit well, but some days you have to keep telling yourself that there is no such thing as a bad genre, only adolescent storytellers.

It takes a while to be drawn into Tobe’s (Dustin Ingram) all too commonplace cinematic existence. In addition to the phallic frank, there’s a standard-issue crusty grandfather named Pop Pop (Brian Dennehy) to contend with (Tobe is an orphan), a voyeuristic visit to a friend’s bedroom where a group of nerd peers spy on the girl of his dreams masturbating in the house across the street, and even a corny close-up of our hero kissing an 8 x 10 of his X-rated goddess. Tobe is a goober. We get it. There is no need to strain further credibility by showing the 17-year-old boy sleeping with a plush Bozo doll.

Pop Pop decides to make a graduation present of the poor man’s wiener mobile. Certain that health-conscious America has lost its appetite for pig eyes and donkey genitalia served on a poppy seed bun, Tobe decides to sell the van. The same day he agrees to drive it from Michigan to a buyer in Loogootee, Indiana, Tobe spots an on-line ad for a personal appearance by his heart’s desire in a neighboring suburban strip club. Tobe and Monica eventually hook up, but not in the slick, giggly manner one normally expects from an American film of this genre. Newcomer Ingram brings just enough guileless candor to defray the irritating, single-minded, antisocial traits generally assigned to Hollywood dorks. Credit first-time director Keith Bearden for seeing to it that his supporting players are more than cursory stick figures assigned one trait to milk for laughs. If that’s your idea of fun, there’s always Bridesmaids. The biggest revelation is Kim Cattrall. With the exception of Ghost Writer, I don’t think I’ve seen her in anything since Big Trouble in Little China. This is a bold, fearless performance coming from an actress generally known for her sex appeal. With her weathered face and gut spilling out over the belt loops of her jeans, Cattrall is about as far as one gets from the fetching Samantha. (Having successfully avoided all variations of Sex and the City I had to Google her character’s name.) As much as I would love to see Cattrall clear a path on her mantelpiece come awards time, her performance is too good. Sadly, the chances of this little film garnering Oscar’s® attention are slim to unthinkable and I mean that as a compliment.

Seems like a great deal about this movie depends on casting decisions, just like making a good review would depend on figuring out if Kim Cattrall was the right choice.

To start from the premise that Kim Cattrall is a fetching sex symbol playing against type is, well, ill-informed.