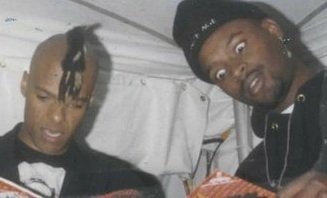 The documentary Everyday Sunshine: The Story of Fishbone, about the band Fishbone and narrated by Laurence Fishburne, will be screening at the Whistle Stop on Thursday, January 12, along with a post-screening Q&A with filmmaker Chris Metzler.

"It's about the black punk band Fishbone from South-Central Los Angeles and the historical and cultural forces that gave rise to the band," Metzler tells the Reader via email.

"From the shifting faultlines of Hollywood fantasies and the economic and racial tensions of Reagan's America, Fishbone rose to become one of the most original bands of the last 25 years. With a blistering combination of punk and funk, they demolished the walls of genre and challenged the racial stereotypes and political order of the music industry and the nation. [Everyday Sunshine] is a story about music, history, fear, courage, and funking on the one." After graduating from USC with a degree in business and cinema, Metzler's film career has taken him from the depths of agency work, to coordinating post-production for awful American movies seen late at night in Belgium. His film directing and producing work has resulted in him criss-crossing the country with the aid of caffeinated beverages.

He eventually made his way in the Nashville country and Christian music video industries, before finally forsaking his soul to commercial LA rock n' roll. These misadventures eventually culminated in him winning a Billboard Magazine Music Video Award.

His feature length directorial debut was the offbeat environmental documentary Plagues & Pleasures on the Salton Sea, which was narrated by counterculture King of Trash filmmaker John Waters. A cult favorite, the film was released theatrically in the United States and broadcast nationally on the Sundance Channel.

Official Synopsis: Everyday Sunshine is a documentary about the band Fishbone, musical pioneers who have been rocking on the margins of pop culture for the past 25 years. From the streets of South Central Los Angeles and the competitive Hollywood music scene of the 1980s, the band rose to prominence, only to fall apart when on the verge of "making it." Laurence Fishburne narrates this entertaining cinematic journey into the personal lives of this unique Black rock band, an untold story of fiercely individual artists in their quest to reclaim their musical legacy while debunking the myths of young Black men from urban America.

Highlighting the parallel journeys of a band and their city, the film explores the personal and cultural forces that gave rise to California's legendary Black punk sons that continue to defy categories and expectations.

At the heart of Fishbone's story is lead singer Angelo Moore and bassist Norwood Fisher who show how they keep the band rolling, out of pride, desperation and love for their art. To overcome money woes, family strife, and the strain of being aging Punk rockers on the road, Norwood and Angelo are challenged to re-invent themselves in the face of dysfunction and ghosts from a painful past.