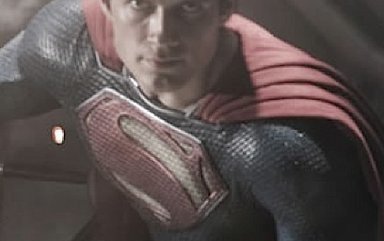 Anatomy of a Press Photo: Evolution of Superman So then they tried the reboot, and apparently, they decided the bright red "S" was a little too...what's the word...comic-booky. "Too much like a superhero comic book. Let's think earth tones. And fabric with a little bit of texture - maybe some waffle-knit on the briefs, and something like a quilted paper towel for the suit. You know, something to distract the eye from Brandon Routh's acting." Now they're trying again. I'd say the costume budget ran short and they ran out for a stippled wetsuit, except Supes' breastplate "S" seems to share the same pattern. Maybe he has to fly underwater and fight a shark? Actually, we're glad we brought up Batman, because goodness me, that costume has gotten dark. Almost like Superman is no longer a godlike hero powered by the very light of the sun, but rather, some kind of dark warrior. Almost like a dark...knight? Oh. Right.