I've been interested in the literary and design style known as Steampunk for a long time. I recently started making jewelry using cues from this fascinating mix of imagery. To get you up to speed on what Steampunk is, it's a term that was coined by author K. W. Jeter in 1987. It originally referred to a new literary genre, cousin to the scientific romances of H. G. Wells (The Time Machine), Jules Verne (20,000 Leagues Under the Sea) and Mary Shelley (Frankenstein). Contemporary writers whose stories took place in 19th century Victorian times, would re-imagine a future based on the speculated science of the time coming true. The time period of the beginning of the industrial revolution was a time of fantastic advances in science with emphasis on steam power and the mechanical gadgets that could be produced. The first “modern era” the visionaries speculated possibilities like lighter than air ships, time machines, and sea, space and inner earth craft that looked as if you never left your living room, but with lots of wondrous gadgets, gears and luminous dials.

Steampunk is also a term that identifies a design aesthetic in fashion, movies, art and sculpture. In creating my Steampunk jewelry line, I’m incorporating ideas and images that include elements of:

Steampunk jewelry became a passion for me when I happened into a our small town style hardware store. As I wandered behind the counter rifling through the old boxes of machine parts, I was amazed at all the really cool shapes and sizes, and the fantastic design of these arcane old fashioned metal objects. The whole store had an aura of another century, maybe even one before that. I had to use my shirt tails to hold all the pieces I wanted to buy, and I’m pretty sure the man working the desk thought I was lost or crazy or both! When I checked out I told him I wanted to make jewelry with it, something called steampunk jewelry, and he gave me a look that indicated he had decided hands down on the crazy. It was a month or more before I went back, and I took with me an article the newspaper had written on me about an art show I was having featuring my paintings, but also mentioning the steampunk jewelry pieces I was making. His wife had seen the article and recognized my name and when he knew all about me, that gave him big credit in front of his wife, he even knew the whole back story on what steampunk jewelry was! I love looking at things and wondering what they’re going to be next, That’s one of the jobs of an artist, and a creative recycler.

As a painter I decided to research the Victorian time period to see what was happening in the art world, to get some more ideas for things to use in my jewelry line. The Victorian time period that Steampunk style is based on, was the period of Queen Victoria’s reign from June 20, 1837 until her death on January 22, 1901, a period of 64 years. Some of the most beautiful, innovative and expressive art was created during that time. It was an era of experimentation and inspiration from the changing society. The innovations of the industrial revolution also affected the artists of that time by opening up the way supplies were made, and their ability to paint outside the studio en plein air, using tubes of paint for the first time, and portable outdoor easels. The invention of photography played a big role in new styles of composition and working from a 2-D surface instead of from life.

The era started the Classical style, with artists using themes from the Roman empire in classical settings, painters worked in an academic style that was dictated by the schools and museums. Following the Classical period, the Romantic school used more emotional and spontaneous expressions. Their paintings are vividly painted exciting and dramatic scenes. In the late 19th century Impressionism took hold of the hearts and minds of painters as a school devoted to the changing effects of light and shadow, the scientific ways of seeing and expressing color. At the same time Photography was making inroads into the art world, as a new art form created by technology. My favorite school of this time was the Post Impressionists. Artists like Van Gogh, Gauguin and Cezanne worked on more than just capturing the light and color of a place, but they included their personal emotional response to the world around them as the subject of the painting. It was no longer of importance to make something look like the image, but it was how the artist felt about the image that mattered. The end of this movement saw innovations from artists like Matisse in the pure color, in the expressive Fauve movement. It’s fascinating to me how the Victorian age went from Academic and Classical non-emotional images and themes to the explosion of emotion and color at the end of the era through Expressionism.

To view images of my Steampunk Jewelry go here www.steampunkjewelry.net To view images of my Paintings go here: www.artstudiosandiego.com Visit my studio for a free tour December 1 and 2, 2012 from 10am to 4pm. Email me for more info [email protected] 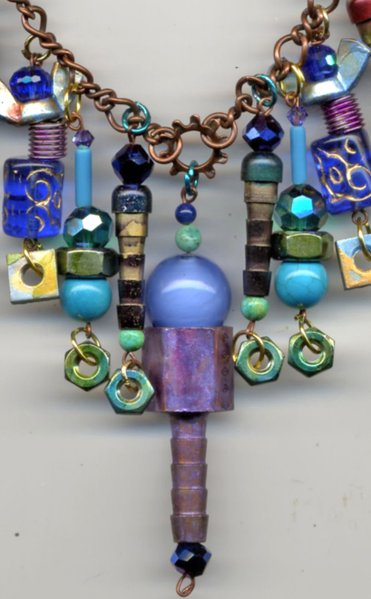