Abyss Creations CEO: "This has to be a very difficult time for the Mayor. We're guessing that now, more than ever, he needs something to grope." 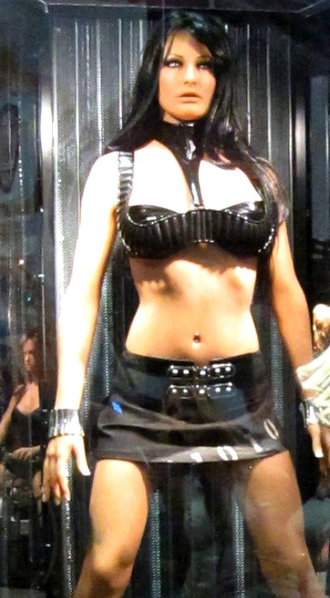 "Look," says Abyss Creations CEO Ina Nimate, "nobody is saying that what Mayor Filner did was okay. But the pattern of behavior clearly points to something compulsive. The poor man was at the mercy of his own habits. There's all kinds of data to show that these habits are triggered by stress, and their indulgence actually releases chemicals in the brain that relieve stress. A lot of people masturbate for this reason. Apparently, Mayor Filner gropes. To be deprived of his chief form of release now, at what is probably the most stressful time of his life - well, it's pretty rough. Remember, addiction is a disease."

"And here's the thing," continues Nimate, "He's trying to be good now. He apologized, he got counseling, he set up structures to prevent his groping in the future, and eventually, he resigned altogether. At this point, San Diego is punishing him for doing the right thing. That's not right, and that's why we're sending him Cindy (above). Cindy is a top-of-the-line second-generation RealDoll, made of flesh-like silicone that has been applied to a rigid skeleton with stainless steel joints. She's extremely flexible and pliant, and it's a safe bet that she will never come forward with a complaint about his behavior."

Very interesting article of fiction. That's actually our Alektra Blue Wicked RealDoll. We didn't actually say anything about Bob Filner, nor did we send him a doll. Who's your editor, Mr. Mencken? Even if it's in the fake news you could at least ask for permission to use our name and our picture...and possibly post our website for our troubles? www.realdoll.com