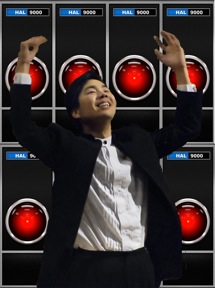 Almost immediatley after Orchestra Nova announced the resignation of Jung-Ho Pak, the famed conductor released an announcement of his own: the formation of an all-robot orchestra that will, as Pak puts it, "finally exhibit the range of on-stage emotion that I demand from my musicians in a precise and consistent manner. I simply type said demands into the robot's Human Adaptation Logarithm, or HAL, and faster than you can say 'Beep boop beep,' the robot is conforming precisely to my emotional expectations - and playing flawless music, to boot. All the energy of live performance and all the perfection of recorded work; it's a win-win situation for fans of classical music."

Pak then announced that Orchestra Robotica's first performance would be an arrangement built around Harry Dacre's classic American folk tune, "Daisy Bell," written by the orchestra itself.

What? Didn't Data demonstrate who a robot can mimic but never duplicate the emotional perfection that comes from actually having real emotions. Strange call Mr. Pak

Almost news just in: Orchestra Nova has, in the interest of fairness, decided to substitute tickets to "Hits of the '80s" for its disappointed fans who can no longer watch Jung-Ho Pak play on the emotions of the human musicians of Orchestra Nova.

CEO Beverly Lambast stated "We know our fans want music, or they wouldn't have turned over their hard-earned cash to us, so it's only fair that we give them the highest quality music available. Everybody knows that the Bee Gees and the Beach Boys are the hottest musicians ever."