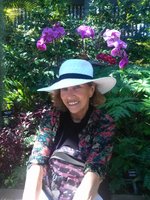 In Sue Garson's early life in NYC she was surrounded by walls of books, art, and the fiery sounds of heated political dialogue. With those influences as muse, she won essay contests, joined the staff of her high school newspaper, and had letters published in The Village Voice.

Along with her young family, she migrated to San Diego in 1972. Within a few years she was writing features and reviews on a steady basis for various local publications. Included were the Reader, La Jolla Light, Union-Tribune, and the Los Angles Times, as well as nationally in The Humanist and Present Tense. Some of her work was reprinted.

Her adventuresome spirit led her to explore six continents where she stumbled upon stories in the former USSR during the Chernobyl explosion. She was an accidental tourist in Tunis during the first Arab League Conference, and she marched along with the Madres in the Plaza de Mayo in Buenos Aires. She interviewed such notables as author Elie Wiesel, philosopher/comic Mort Sahl, film director Paul Mazursky, and Argentina's foreign minister, Hector Timerman.

She currently harvests organic fruit and vegetables in her San Diego garden, cooks spicy curries, and is the nontraditional matriarch of a four-generation family.

The Forgotten War Conversations with men who never forgot I do not recall putting my foot on Korean soil for the first time. I only remember the cold rain, and running, and others running with ...

The Forgotten War I do not recall putting my foot on Korean soil for the first time. I only remember the cold rain, and running, and others running with me. By David Burge, June 20, ...

Tiny Island Court has 31 short-timers Bayside Walk listed 121 rentals spread out between 15 blocks, with 50 rentals on just two blocks. Mission Boulevard listed 81 rentals on 17 blocks. It then dropped to ...

19 townhomes at 32nd and C instead of park The largest undeveloped parcel in Golden Hill, once considered by the Greater Golden Hill Planning Committee as a top choice for a neighborhood park, is now ...

Till death do us part For so long, she wanted so badly to talk about her relationship with Daniel Broderick. Betty Broderick wanted to tell the their divorce and the awful injustice she felt she ...

From the archives
Best Reader stories from 1985

The spirit of Steve Ponchetti It has forever been the custom of the Diegueño Indians to bury their dead twice: once at death, and then once again a year later. And so it was that ...

From the archives
More than one point of view on Thanksgiving

The ideal hipster Thanksgiving As I’ve pointed out before, no holiday lacks the potential for a hipster makeover. Thanksgiving is no exception. Not only is it nestled comfortably between epic Halloween costumes and ugly-Christmas-sweater parties, ...

From the archives
Best Reader stories from 1978

From Spanish rancho to hard-core Marines In 1942, the Ninth Marine Division marched in and took over what had been the Santa Margarita y Las Flores Ranch. The Second World War had begun and the ...

From the archives
Sue Garson and the Reader

How Garson came to write for the Reader: When I stumbled into a small piano bar in Bankers Hill called the Caliph, a steady stream of after-hours nocturnal characters drew me to them as they ...