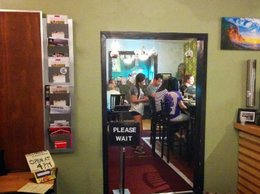 It's a crying shame that this North County sushi haunt doesn't live up to the self-aggrandizing attitude of its own website. If half of their "unorthodox" sushi was half as good as it promises to be, the place would be a winner. As it is, the kitchen relentlessly tinkers with the art of sushi, getting further and further away from deliciousness with every effort at revolutionizing a craft in which they have yet to master the basics. The end result isn't exactly bad, it's more average than anything else, but the letdown of such a promising concept is almost too much to bear.