As a result, the San Diego County District Attorney’s Office has an entire team of professionals dedicated to reducing WC fraud. Our staff works closely with the California Department of Insurance to enhance public awareness, deter potential defrauders, and proactively investigate and prosecute WC fraud.

There are three types of Employer fraud. First, employers may deny injured workers the full range of WC benefits. For example, an employer may pay a medical bill or persuade an employee to accept cash in lieu of filing a WC claim. Claim denial fraud is a felony.

A second form of Employer fraud is Premium fraud. This involves employers lying to insurance carriers regarding payroll to obtain reduced WC premiums. Employers may pay workers in cash and fail to report this payroll to their carrier. Premium fraud is a felony.

The third type of Employer fraud involves operating a business without WC insurance. For example, an employer with 10 employees but no WC insurance. This is a misdemeanor.

Industry experts expect increases in WC fraud due to the economy. The worldwide financial crisis may lead some law abiding individuals to commit WC fraud.

As a result, San Diego County District Attorney Bonnie M. Dumanis launched in January 2009 a public awareness campaign featuring 16 billboards placed across the county aimed at curbing WC fraud. “During difficult economic times like the ones we’re facing now, WC fraud has shown to increase,” said DA Dumanis. “This powerful anti-fraud message will be seen by an estimated one million people every day in San Diego County.” These freeway billboards appeared for 6 to 8 weeks through February 2009.

Dennis Jay, Executive Director of the Washington D.C.-based Coalition Against Insurance Fraud, praised the DA’s proactive approach. "These billboards not only will help would-be fraudsters to think twice, but they also enlist the support of honest citizens. It is money well spent and District Attorney Dumanis should be commended for her vision in reaching out to the public."

In October 2009, the District Attorney’s Office also began distributing WC anti-fraud posters, in English and Spanish, to employers to display in the work place. The posters message is that WC fraud is a felony and people go to jail for committing this crime. Due to the success of this approach, and the high demand for posters, this project will continue indefinitely. We plan to distribute 200,000 posters countywide.

In October 2010, DA Dumanis announced a new public awareness campaign featuring a series of short ads placed on over 340 movie screens across San Diego County aimed at curbing insurance fraud. The movie ad campaign sought to deter people from committing WC fraud and Auto insurance fraud. The slogan, “Don’t do it, don’t tolerate it, report it” encourages the public to report the fraud to law enforcement.

In September 2011, the campaign turned toward the print media to spread the anti-fraud message. Using the same graphics and slogan from the posters, the DA has placed the message in various ethnic newspapers throughout the county. Ethnic newspapers were selected in an attempt to reach the diverse population of San Diego County. This campaign is anticipated to run through June 2012.

These anti-fraud campaigns will encourage people to think twice before committing insurance fraud and also lead to new case referrals. The DA’s Office has already received numerous referrals as a result of these public outreach efforts. While our office is ready to prosecute insurance fraud, we hope to discourage individuals from entering the criminal justice system.

Overall, we seek to promote a competitive and fair business environment. The public sector, working with employers, employees, insurance carriers and others can assure a level playing field for law-abiding employers to compete for business. This ultimately leads to lower WC rates for employers, more benefits for injured workers, and a reduction in the costs of goods and services for consumers.

Local residents have started a petition against what they consider to be an offensive, intimidating billboard from the DA's office targeting Latinos in their neighborhood: 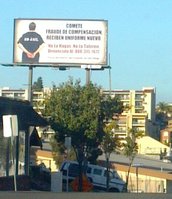