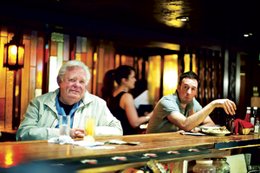 If this piano bar connected to the Lafayette Hotel was a dive, it was one of the classiest dives in the world. With 16th-century English woodwork, the Red Fox Room offers a slice of history you can find nowhere else in this town. According to the restaurant’s website, “The Red Fox Room was an old inn in Surrey, England and dates from around 1560. The Tudor paneling and the fireplace with its finely carved mantel bear the date of 1642. The three arched panels tell the story of Rebecca and Isaac as found in Genesis, Chapters 24 and 27.”

The Red Fox Room in England was purchased by William Randolph Hearst and dismantled in 1926. It was shipped to California and reassembled for the Marion Davies “Ocean House” mansion Hearst was building on the beach in Santa Monica for his longtime mistress. The architect for the beach house was Julia Morgan, also the architect for San Simeon, a.k.a Hearst Castle. The Davies property sold in the 1950s, and most of the building was destroyed. At some point, the Red Fox Room was removed from the mansion, and placed into storage. Part of the restored mansion remains today as the Marion Davies Guest House, at 415 Pacific Coast Highway, Santa Monica. It can be visited for free; no reservations are required.

Owned by the Demos family since 1966, the restaurant ended up being managed by Jim Demos after his father retired.

Typical patrons may be a bit older, but it’s a cool place to take a date if you want to actually communicate — without having to shout over loud music.

In 2018, the Red Fox Room and Steakhouse announced plans to relocate across the street to 2200 El Cajon Blvd., on the corner of Mississippi Street.

I've only eaten at the Red Fox once, with a buddy that knew a lot about the lore and history of the place; It was a favorite of his parents', apparently, around the time he was conceived. According to my friend, it's like it's still 1970 there, nothing has changed. With an institution like the Red Fox, that is a great thing. Pluses: Strong mixed drinks, great service (my Coke ranneth over) and one of the best steaks (I think we had ribeyes) around. You get a simple salad, meat and potatoes. No frills. Kind of divey, or shabby-chic kind of like the Imperial House up the road in Banker's Hill, lots of red pleather and lounginess. Minuses: The lighting was too low for my liking, but hey, maybe it's for the romance! And of course, parking in the area was not terribly difficult, but it wasn't as close as one might want with older relatives in tow. Good stuff.