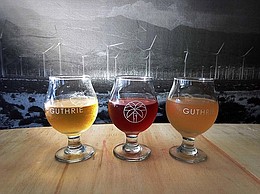 Guthrie CiderWorks is owned and operated by the Devoto Family, which has its roots in Argentina, England and New York. Horacio, the cidermaker, is also a photographer and filmmaker. The company name is a tribute to British-style cider. In England and other parts of Europe, there is a long tradition of making dry ciders, a style that is difficult to find in the U.S.

They opened to the public in 2018. “We should have done this a long time ago,” notes Horacio Devoto, who co-founded the business with his wife, Sara. “There’s a reason why most people — everybody really — starts with a tasting room,” he says. In addition to higher retail profit margins, “It’s how you get introduced into the community, it’s how to make connections, it’s how to get marketing out there.” He jests, “We like to do everything upside down.”