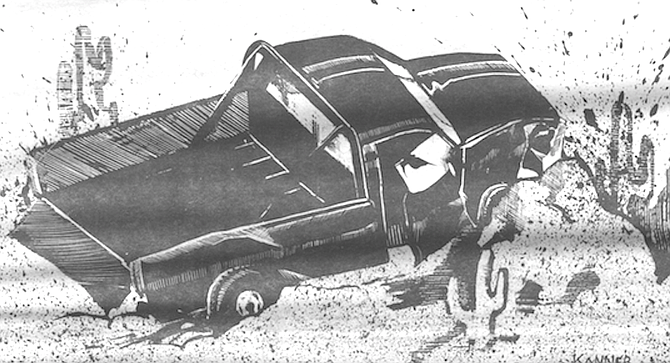 “Karla and I went to different homes looking for pilots. We finally found an American who said he’d fly out at first light and everyone kept saying it was impossible to do anything at night there."

What on earth am I settling for “Goddamnit,” said Jane one evening about six months ago when I answered the door of our apartment in Golden Hill and found her on the stoop, Jeanne sliding ...

Three days along the San Dieguito I knew I’d made a bad mistake. I jumped back, but it was already too late. A yellow, foul-smelling mist rained down on me. It was a direct hit, ...

Somewhere Between Death and the Border “I ran over to pick the suitcase up and, yeah, Eddie was laying there, face down in this pool of blood in the sand about a foot across, laying ...

A Quiet Place South of Here The sea urchin is a major object of the villager’s sea harvesting. The wind and sea are calm enough for harvesting sea urchins fewer than half the days of ...

Toyota rolls in Baja 300 miles south of San Diego; we scramble to find a plane

Somewhere between death and the border

“Word spread among the Americans [around the Pemex station] that there was an emergency and some fellow who identified himself as an orthopedic surgeon peered in the back of the van and attempted to assess Eddie’s condition.”