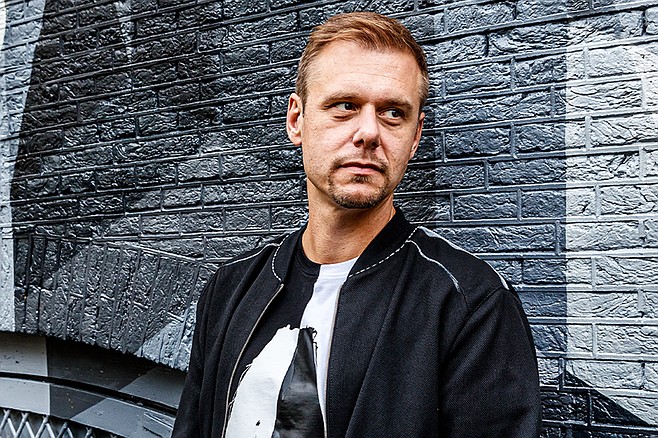 M. Hernandez and Armin Van Buuren: from raving to raging

“Just chill on the binkies, candy beads and super-oversized Dickies”

M. Hernandez scoffed when he saw the “rave safe with these 10 essentials” list posted on the iEDM site last summer. Hernandez, now in his 40s, is prepping to watch EDM veteran Armin Van Buuren at SOMA on February 5.

“Ear plugs and hand sanitizer,” he said of the 2020 raver’s list, “these kids are afraid of loud music and germs — times have changed.”

Hernandez is an old school 1990s raver who used to obtain hints of then-raves — or what we called underground parties — via a “piece of paper in a plastic Easter egg,” or through secret code in America Online private chat rooms. Back then, raves were exclusive to the few that made it past the multiple San Diego County map-points placed to “shake off the tails.”

“Law enforcement was always trying to bust us,” Hernandez said. “We were simply: hugging, rolling” — using ecstasy — “and dancing. It was about PLUR.” (Peace, love, unity, and respect.)

“Why’d you Google that raver list?” I asked him.

“I wanted to be brought up to speed,” Hernandez responded, “I don’t want to look out of place at Armin’s concert next month. Besides, I don’t think they call these legit EDM concerts raves anymore.”

“Just chill on the binkies, candy beads and super-oversized Dickies,” I advised him, “and you should be OK.”

Van Buuren gained notoriety in ’97 with his saw wave infused-trance jam, titled “Blue Fear.” Then in ’99, while many on the world wide web speculated about the Y2K computer crash, we were instant messaging one another about the Dutch-DJ’s “Communication” song that just dropped. It’s a 135-bass-beats per minute and vocalless-song that guided some of us into the proverbial state of trance when its bass disappeared from the track, and the acoustic piano solo backed with space age-esque rhythms, ensued.

“That whole space age feel was what I felt listening to Armin’s older progressive trance,” Hernandez said of the subgenre of electronica music that morphed from the techno, house, and new age music — within Europe and India in the early to mid ’90s.

“Even the rave fliers had that space age vibe.”

“I still have those old rave fliers,” I responded, “one with Van Buuren headlining.”

“We didn’t have these ‘rave safe’ reminders, nor rave-app updates, back then transmitting to us,” Hernandez said as he pulled out his iPhone. “When raves became sorta legit, we had paper fliers that those guys and gals designed on their translucent [Apple G3 iMac] computers. Them graphic designers were overlooked, and are the real-MVPs of the scene back then,” Hernandez said, “their edgy designs united us ravers and DJs.”

Fast-forward to 2020 where Van Buuren’s still ragin’ with the youngsters at club events and what we now call “music festivals.” He’s pulled 394 million views and counting on his 2018 YouTube video of Blah Blah Blah: a hard/psytrance track backed with Van Buuren’s signature piano playing, and lead via kiddie-sounding vocals that go:

All we ever hear from you is blah blah blah

All we ever do is go ja ja ja

And we don’t even care about what they say