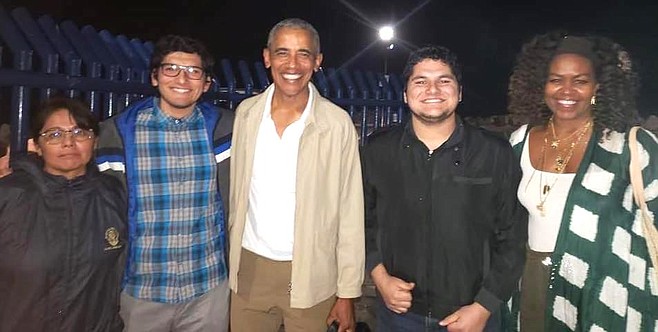 A photo of former-President Barack Obama and Michelle Obama, posing next to three others in Loreto, surfaced online on Jan 20 – three days after the former first lady's birthday. Two days later, a video was posted by La Mision Loreto, a hotel and resort – on their Facebook page. 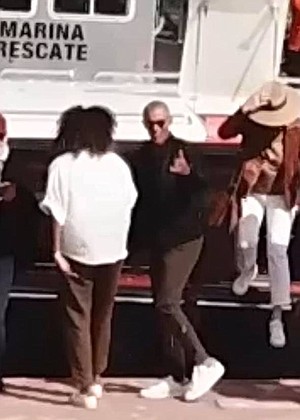 "They are likely going to a place ten miles south of town."

On the two-minute video captured via drone, the former first couple, disembark from a black boat with a white awning and a Cayman Islands flag towards the rear. About 14 others stand on the pier; some of whom receive hugs or handshakes from the Obamas. The former president grabs two bags from the boat, follows Michelle, their entourage and security, toward four white vehicles waiting on the pavement atop the gangway. Another boat docked bearing the name Marina Rescate carried two individuals wearing orange uniforms monitoring the visit.

"I have tremendous respect for the former first family," Tom Summers said to me on January 25, "to see them traveling in Baja California South really warmed my heart."

Summers, a 73-year-old Navy veteran, has driven to Loreto several times, about 700 miles south of his Imperial Beach home.

"I was there with my friend Alex in July and early August," he said. "I'm sure there was a huge level of security there, which is one of the reasons why they hurried up Barack Obama."

"The owners never ride the yachts in, they chopper in."

The two-minute video footage was sped up in certain sections, then slowed back down. At the 45-second mark, the Obamas walk toward and board one of the four white vehicles; as another white vehicle pulls up, the five vehicles take off. The drone then ascends as the motorcade travels westbound, away from the Sea of Cortez.

"Just inland from Loreto, are these beautiful, craggy silhouetted mountain ranges, and then you got the desert that leads up to it," Summers said.

As the caravan leaves the malecon (thoroughfare along the waterfront), they are lead and tailed by what appears to be police units.

"I can tell you, they are [likely] going to a place ten miles south of town, where this Canadian development is," Summers said, "where all these really nice places are. I know the chief of security down there (at the development); he used to live here in San Diego."

Summers is a retired tugboat engineer for Foss Maritime Company, and worked on super yachts in Chile and New Zealand.

"I noticed the big yacht in the background," he said, "something that big is not a common sight down there."

"What should've been discreet quickly became an event in this community after the American ex-president kindly agreed to take pictures with several people during his arrival who began posting these images on Facebook,” said Javier Chavez Davis, a Loreto news reporter.

"The arrival [of the Obamas] was at approximately 9 pm at the Loreto International Airport in a private plane and under discreet but very extensive security measures. The distinguished visitors were quickly transferred to the Loreto dock, later to board the famous Seven Seas yacht owned by Steven Spielberg, in which [they] will be touring the Loreto Islands.

"It should be noted that for several days a strong activity of embassy personnel, intelligence bodies of both countries and high-level tourism services companies, began to prepare this arrival under all possible discretion, which definitely broke down thanks to the how quickly the [Facebook] images were made public today (January 20)."

"I was surprised that there was drone footage," Summers said.

"It's likely a Mexican drone pilot, because Americans are not allowed to fly drones in Mexico," continued Summer's friend.

There were hundreds of comments below the drone footage posted and shared online, but none mentioned if Spielberg was a part of the group with the Obamas.

Other than yachting with Spielberg, what is President Obama doing these days? Organizing his Library in a public park in Chicago, but what else? The kids are out of the big Washington, D.C. house. Michele's written an interesting book. What about Barack?

He is keeping a low profile as Trump wants to impeach him.