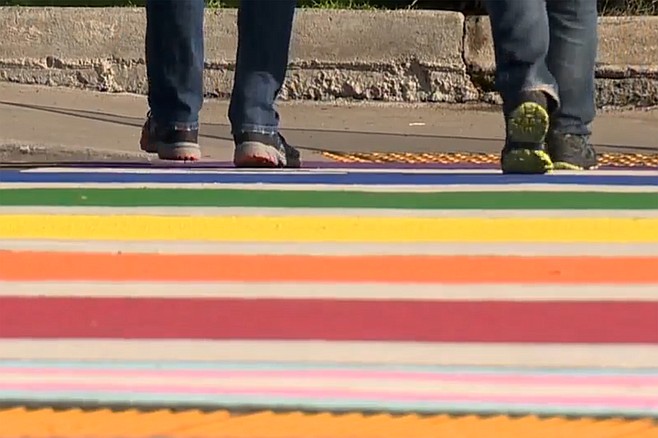 Two weeks ago, Hillcrest residents woke to a horrible surprise: a vandal had replaced the white stripes of a heavily trafficked neighborhood crosswalk with the colors of both the iconic rainbow flag and the more recent transgender flag. “It’s just awful,” said Marquis of Hillcrest Gay Furiously. “During the persecution of Christians in Japan, they would make believers step on an image of Christ’s face. in In Iran, they make people trample on images of the American flag to indicate their disdain for The Great Satan. And now, right on the corner of Normal Street in Hillcrest, some hate monger has made it so that when pedestrians in San Diego’s gay district want to safely cross the street, they must walk all over their own flag. In essence, it’s a declaration that members of the LGBTQIA+ community must stomp on their pride in themselves and behave like ‘normal’ people if they want to stay safe. Just super evil stuff. And the worst of it is, nobody’s had the guts to remove it yet.”