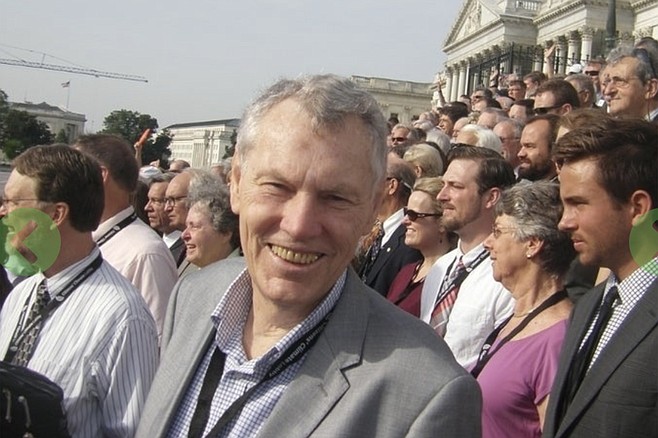 In a couple of days they’ll be memorializing Marshall Saunders, the San Diego man who tried to save the world. I considered him a dear friend even though I knew he had hundreds, maybe thousands of others who loved him just as dearly.

What I’ll remember is those afternoons when we sprawled like seals in the winter sun at Cafe Madrid, arguing about how to save this planet. He was from rural Texas, spent his time in commercial real estate, negotiating shopping malls. Not the first person you’d think of in the same breath as a save-the-earther. But that’s all he was into: doing good. Muhammad Yunus, the Bangladeshi inventor of the Grameen micro-lending bank, so inspired him that he flew over to Bangladesh and ended up starting his version of a Grameen bank for Northern Mexico, Grameen de la Frontera.

Then, in 2006, he saw Al Gore’s An Inconvenient Truth. “I realized that all the good in the world wasn’t going to [help] if climate change made people’s homes unlivable.”

He went around giving climate change talks: to Rotary Clubs, schools, anyone who would listen.

We were on our way back from the coffee cart. He was down. “I’ll tell you,” he said. “It’s hopeless. I give these speeches, and yet at the same time, the coal lobby persuades Congress to give it something like $18 billion in subsidies to increase production.”

That’s when he decided to create an army of citizen lobbyists.

“I realized that anything my audiences intended to do would be swamped by what the government did or did not do,” he wrote later, in his online biography. “I realized that ordinary people like me would have to organize, educate ourselves, give up our hopelessness and powerlessness, and gain the skills to be effective with our government.”

His main discovery: You don’t have to be rich, important, or backed by some major corporation to qualify as a lobbyist. “Any of us can be,” he said.

So he created the Citizens’ Climate Lobby, in 2007. It has since blossomed to 561 chapters with upwards of 200,000 members around the world. I sat in on a couple of their weekend training sessions, and I was surprised to hear Marshall train neophytes on conference call about how to address a congressman face to face, how to stand your ground without being rude, and above all, how to keep the discourse polite.

Marshall saw one of his dreams, a federal carbon tax proposal, become at least a bill (HR763), before he died late December. But most of all, it is the army he leaves behind that will carry on this modest guy’s immodest fight. Now, Congressmen and women have two annual visits to face from Citizen’s Climate Lobbyists, 1200 of them (it was 25 the first year), ranging up the steps of Congress with questions on progress. Face to face.

Even people who completely opposed him, or just saw him as hopelessly quixotic, would have to call that progress.