Del Mar officials want the trains off the bluffs. Transit officials want the people off the tracks. Neither side is succeeding, and with the number of trains increasing from 50 to 79 this year, the threat of accidents hangs over both.

Last year, a lawsuit filed by the family of a man struck and killed as he crossed the tracks accused the city of Del Mar and the railroads of failing to provide safe crossings like tunnels and bridges. 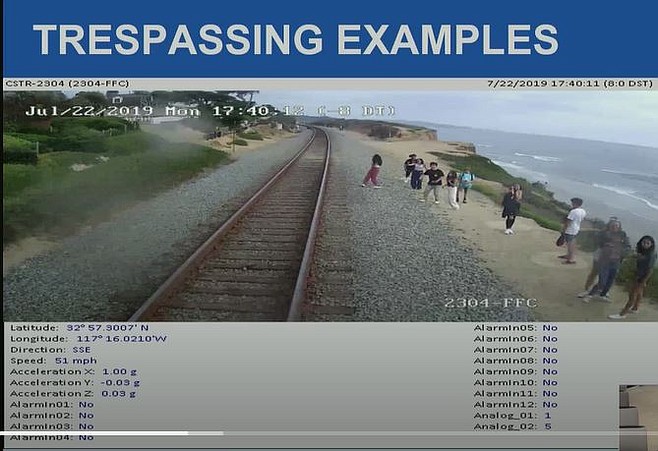 But as a multi-year project gets underway to stabilize the bluffs to make travel safer for trains, the only plan to make things safer for pedestrians is more signs and enforcement.

During recent repair work, trespassers were afoot, according to the North County Transit District, which claims the right-of-way along the 1.5 mile stretch of bluffs.

It's the same sweep of tracks locals have crossed to get to the beach for as long as anyone remembers. And before that, there was a deed, they say – which still gives them the right to cross in certain areas.

"All rights North County Transit District or the railway have to the bluffs upon which the tracks lie are subject to the provisions of this deed," Tom Grindle, a Del Mar local and attorney, told the city in 2018 when the trespassing issue was heating up again.

Since then, only the bluffs have changed, crumbling into the sea in six major collapses.

Trespassing reports, combined for 2018 and 2019, peaked in November: 170 incidents from Coast Blvd all the way down the bluffs, a transit district spokesperson told the city council last week during a safety presentation.

The incidents have involved as many as 50 people at one time. Most reports are filed by the train crews. Some were fatalities. Since 2015, there have been seven deaths.

Then there are the near misses that caused slowing or emergency braking; 34 since 2017. And behind every delayed train is a cascade of service disruption. The last five accidents in Del Mar held up 35 trains, annulled eight, and caused others to miss multiple stations.

The district has even calculated how much time these cost; 1,459 minutes, 5,250 passengers disrupted.

While it may seem easy to avoid being hit, rail officials offer a warning. The trains are quiet, can travel over 50 mph, and have a wider reach beyond the rails than people realize. The public lacks the training employees receive.

But the transit district's solution, a proposal to fence off the tracks, didn't survive public outrage over being blocked from all but the one legal crossing at 15th Street. That was when Grindle got involved.

In 1909, the city’s founder, the South Coast Land Company, granted the railway the land for its tracks. They reserved the right for access to the beach over the tracks in between 10th and 11th streets, Grindle said. The deed also allows "passageways to the ocean beach."

Grindle attached the deed in a letter to the city council so they could consider using it, in court if necessary, "in pointing out to North County Transit District that it does not have the legal right to block our bluff and beach access."

The council rejected the fence, instead working on more safe rail crossings. But the "Safe Rail Trail and Pedestrian Crossing feasibility study," which brought together the city, North County Transit District, and the San Diego Association of Governments, didn't get far.

What is in the works is a trespasser mitigation study by the transit district, which is "fully committed" to snuffing out the risky behavior. A draft will be released in March.

Other measures include more "no trespassing" and suicide prevention signs, more training for crews on reporting criteria, and increased presence of law enforcement.

The city can help, they say, by putting signs at all public access points to discourage trespassing, and closing off the trails from Powerhouse Park and the highway 101 overpass bridge leading to the right-of-way.

Robert Hajek, another local attorney, said he was anxious to argue in court on behalf of people who have been getting ticketed for crossing the tracks.

"I believe this issue has to be dealt with by the city." It's a difficult one, he said, "because you have to prove you're a resident of the city to cross."

Stop interfering with evolution. If you are dumb enough to step in front of a train, go ahead

Walking on railroad tracks is stupid. If you're hit and killed by a train, you have nobody to blame but yourself.

You can't fix stupid. As long as there are train tracks people will cross and some will be hit. Same thing with roads. After a bluff collapses and a train is derailed and people are injured and killed will anything be done about moving the tracks. What will happen is that the train service will stop at the station north of the collapse. The NIMBY's will not want the tracks to run through their neighborhood (I don't blame them) and the lawsuits will take years, if not decades, to resolve. Once resolved it will take years and billions of dollars to relocate the tracks. Until then it is all just talk and posturing by the political class.

This is an interesting notion. In recent decades, the federal government has taken close control of many railway operating issues, and it has precluded local matters. (As late as the 1960's some cities had ordinances that prohibited trains from blowing whistles and horns as warnings. Those are now unenforceable unless stringent conditions are met, usually at crossings.) The Federal Railway Administration (FRA) controls most of the regulations. So, I'm not sure that something in a deed from a century ago supersedes present-day regulatory law.

This problem could have been simply solved years ago with two or three pedestrian overpasses at the popular crossing points. Del Mar or the county or the state could and should have constructed them back when governmental-paid structures didn't have to be gold plated monstrosities costing $ millions. Why wasn't that done? My speculation is that locals saw such overpasses as acquiescence to the presence of the rails, and that is something that many Del Martians will not do. They prefer to say that the rails are illegitimately placed there, and must be moved ASAP. To in any way accept the necessity of keeping the rails open and operating would undermine their case. And so the beat goes on.

It will be most interesting to see how this plays out in court (if it ever gets there.) One thing is for certain and that is that it won't make hopping across the rails any safer or save a single life.

I've been walking and running on the bluffs since I moved here in the 80's. It's not dangerous as long as you're not drunk, high or mentally ill. What NCTD fails to mention in all their presentations is that 99% of the deaths by train are suicides. There have been other cases of people hit while trying to save their unleashed dogs. But that's just Darwin in action.

Crossing the tracks to get to the beach is completely safe. Trains can be seen and heard from far away. All of this conversation about deaths is just because NCTD has no solution to the suicides. Do you really think people intent on harming themselves won't find a way to get on the tracks?

Not all deaths on tracks are suicide. I recently read a story where a teenage girl went back to retrieve her cell phone on the tracks. She didn't hear the train coming because she was listening to music. People walk on tracks all the time. And they get killed. Once again, if you cross the tracks - you're stupid. Find a safer place to cross. Everyone that is hit and killed thought it was "completely safe."

Written like a resident of El Cajon....take a drive down to 11th street any day of the week. You'll see many other "stupid" people like me crossing the tracks. Those long things they're carrying are surfboards. We need the ocean to use them so we cross the tracks. This has been going on for 50 years and not one surfer has ever died. Gee, I wonder why?

And, as I said, not everyone who's hit by a train is committing suicide, just 99% of them. You really should educate yourself about this issue instead of swallowing the NCTD press release garbage.

It's not 99%. Nationally, it's 30%. You can google it, and find the same story I did. Which means 70% of the deaths on tracks were preventable. Stupid people on the tracks. Period. 30% is FACTUAL, You're the one who needs to EDUCATE YOURSELF, not ME.