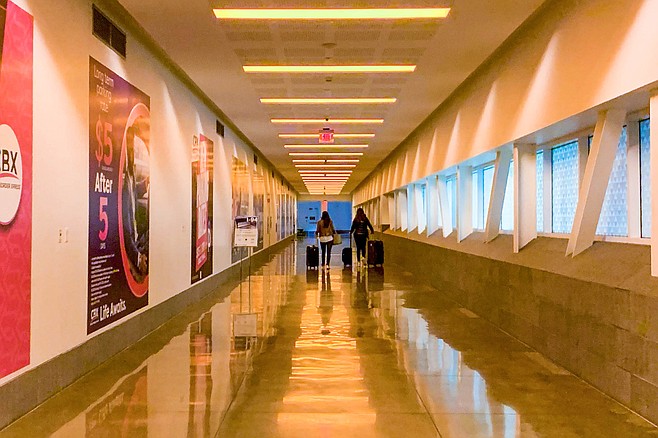 For most of my adult life, the intentional misspelling Xpress has been applied to services including oil changes and dry-cleaning — it certainly hasn’t been a word I associate with crossing international borders. But Cross Border Xpress, a.k.a. CBX, changed that four years ago when it opened a bridge crossing directly from an Otay Mesa business park into Tijuana International Airport. 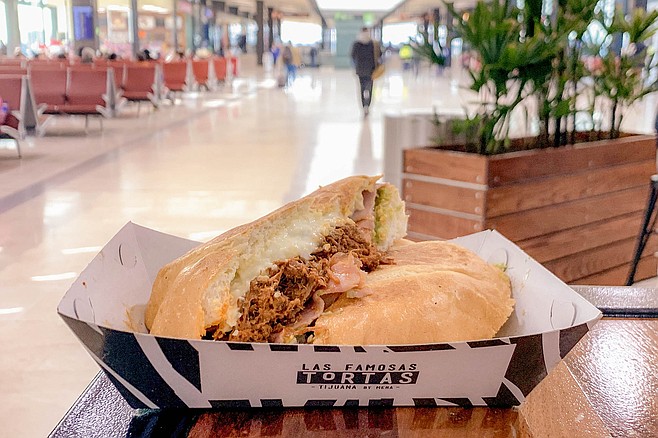 A tasty torta in the Tijuana concourse

Cheap, direct flights throughout Mexico were always available out of Tijuana; this just made catching them a little more accessible to San Diego travelers. And I’ve got to admit, it’s pretty damn easy. It costs $30 round trip to cross at CBX, and $15 a day parking, but the total distance I had to walk to catch a recent flight (about .7 miles, according to my phone) was actually less than my last couple domestic flights out of San Diego International Airport.

The CBX terminal functions like a tiny airport: airline ticket counters and computer terminals that scan your passport and print out a customs document. From there, you simply pass through customs and cross the so-called skybridge, a raised, orange-lit tunnel that passes over the border to airport security, and through a duty free shop that releases you directly to Tijuana Airport’s concourse. Note, there’s a currency exchange in the concourse, but no ATMs. 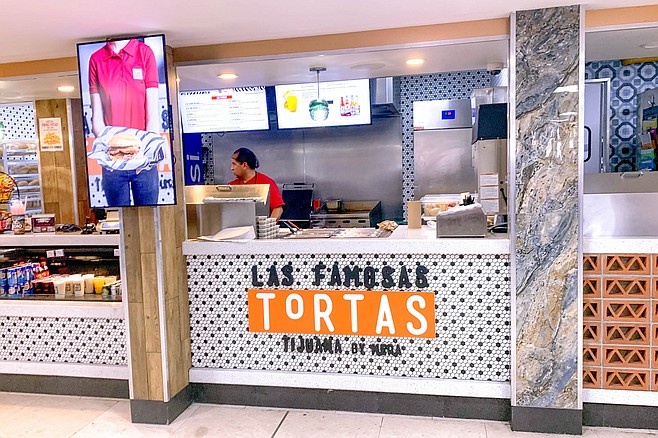 I’d never flown out of Tijuana, and was eager to see how this airport’s food vendors compared to San Diego’s. At first glance, not great. On the approach to my gate, the first counters I saw offered Panda Express, Domino’s Pizza, and the burgers and fries of the Johnny Rockets franchise. Somebody planted a mall food court in the TJ airport, I thought, summoning the overblown sense of untoward moral outrage that sits in all of our back pockets these days.

While the appearance of a couple habit-wearing nuns standing in line at the Johnny Rockets counter settled my perspective, even priced in pesos these were nine-dollar burgers. More to the point, this was the first fifteen minutes of a week spent in Mexico, and I didn’t want my first meal to be American fast food. 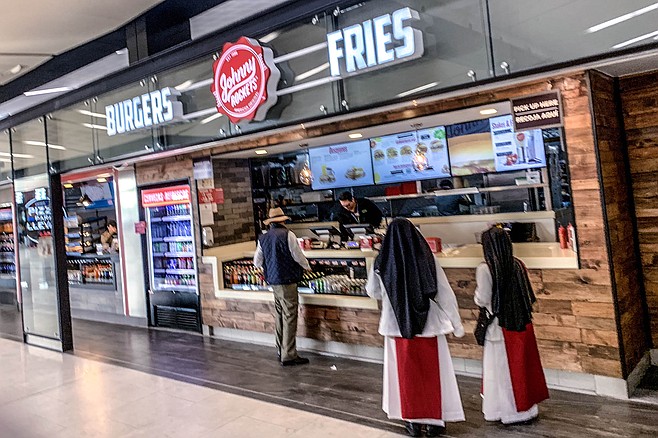 A pair of nuns contemplate their hamburger orders.

Fortunately there are, less visible in the back of a recessed dining area, three Mexican food counters: a mariscos and tacos bar, a burrito stand, and Las Famosas Tortas.

The Las Famosas branding has all the appearance of a chain, but appears to be a little stand-alone kitchen grilling up sandwiches on pillowy soft telera rolls. The meaty sandwiches still go for eight or nine dollars and change, which is pricy for Tijuana, but not for airports. It serves tortas made with chorizo, carne asada, and breaded chicken (milanesa), but I was pleased to grab the lomo especial, which features a spicy shredded beef, turkey ham, avocado, and melted Oaxacan cheese. That bread, in particular, astonished me.

Getting back to the span of my adult life, I’ll be the first to tell you that San Diego airport has made sincere and successful efforts to raise its terminal food game. But whichever favored local restaurant brands they might advertise — e.g. Phil’s BBQ or Stone Brewing — they never live up to the standards of the corresponding properties outside the airport. Rather, they fall into the same trap as nearly all American airport food vendors: regarding food as a commodity to be price-hiked for a captive audience.

Which means this little tortas stand in the Tijuana airport just made me the most honest and satisfying airport meal I can recall.