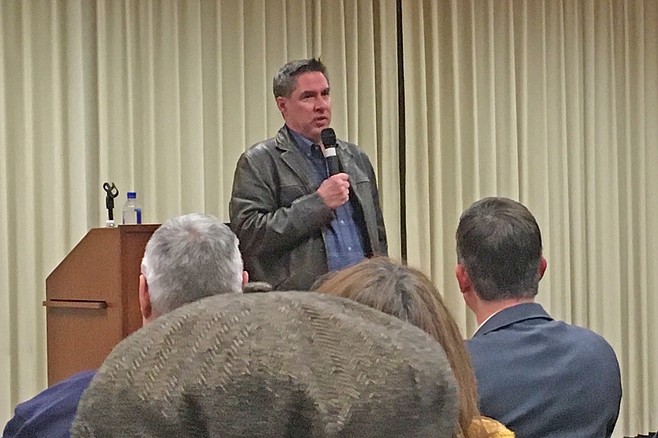 Brad Taylor does his homework. Twenty-one years in the Army (including eight with Delta Force) is an education in itself, but it’s research that has helped make his Pike Logan novels bestsellers. “Newsfeeds,” he told the crowd gathered on the evening of January 8 at the Coronado Public Library to hear him talk about his latest, Hunter Killer, at an event put together by Warwick’s Books. “Defense One, Breaking Defense. Foreign Policy has a situation report, Military Times has an early bird. There’s hacker news.” He tracks technological advances, and puts boots on the ground whenever possible. When Logan took on Boko Haram in Days of Rage, published just months of the Chibok schoolgirl kidnapping, “people thought I could predict the future. Not really. They’ve been lopping off heads since 2009.” They just hadn’t made the headlines yet.

This time around, the story that caught his attention was the deployment of Russian paramilitary operators to serve as “a kind of Praetorian guard” for Venezuelan President Nicolas Maduro. “I hit upon a strategy document that Russia has where they say they want to get into our ‘near abroad.’” Combine that with the instability in Brazil, where the Car Wash scandal put the President behind bars but failed to derail his popularity, and Taylor had everything he needed for Logan to get to work. 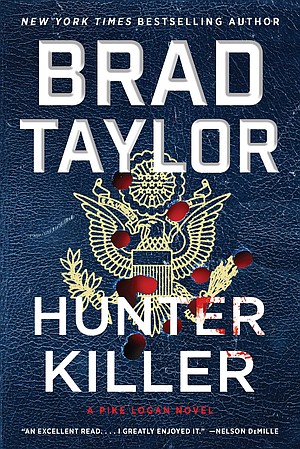 What he didn’t plan on was the morality that “seeped out of me and into the book as I was writing.” The newsfeeds told him that “a lot of special operations guys were getting accused of war crimes, and people in the press were saying, ‘That’s okay; we should let them do what they do.’ That aggravated me.” Taylor said that National Security Affairs types are divided between Kant’s categorical imperative and John Stuart Mill’s “greater good” argument. “It works itself into almost every situation when you go into combat.” And he found that Logan had his Kantian limit, the point where “he’s not that guy.”

Toward the end of Taylor’s presentation, a woman asked if he’d ever been suspected of being a spy. “You haven’t heard my story!” he exclaimed, which gets us to the title of this piece. Taylor insists that he’s not Pike Logan, but that’s no reason why he shouldn’t be at the center of the next Pike Logan story, in which a military novelist sets out to do his homework on what it would take to orchestrate a coup in a small country, and in so doing, stumbles, as he did, “into a geopolitical problem set that [he] didn’t know existed.” After taking pictures of “the television station, the police station, the radio station, and Parliament,” and after texting his wife that he’d found the location for his (book’s) secret base, Taylor visited the a military outpost near Lesotho’s capital and said, “‘I’m an American soldier; can I come in?’ Two SUVs pulled up, they threw me in the back…and I got on base.” I won’t say more; wouldn’t want to spoil the novel.