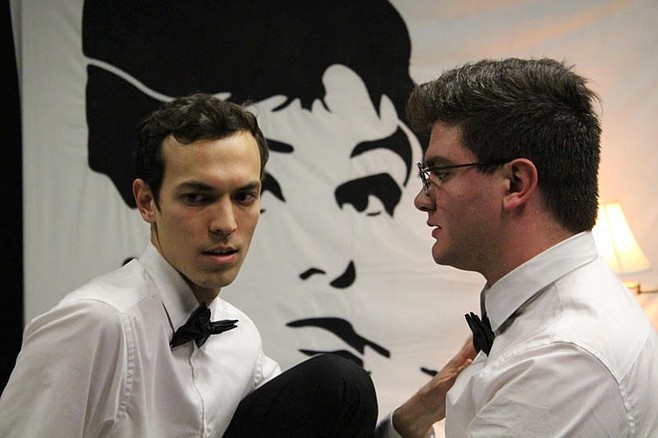 Madame has been a mistress; that is all, and that is enough.

Toward the end of the Nervous Theatre’s production of Jean Genet’s The Maids — which, by the time you read this, will have departed for Seattle after a one-weekend run at the Tenth Avenue Arts Center (the troupe does describe itself as “rootless,” so) — one of the titular characters declares, “It would be a fine thing if masters could pierce the shadows where servants live.” But of course, they can’t; not here, anyway. If they could, then perhaps Madame might be able to understand why her maids Claire and Solange regularly perform an elaborate ceremony in which one maid plays Madame and the other plays Madame’s murderer. And why, in that ceremony, Madame is portrayed as an abusive monster, bellowing invective such as “Servants ooze” and “You are our disgusting mirrors,” and indulging grandiosities such as “Through me alone, the servant exists.” (True enough, but…)

As it is, Madame would very likely be flummoxed. Does she not allow her maids to bathe in her own tub every week? When she declares her intention to give up the party life and devote herself to her imprisoned lover, does she not give them her red dress and fur coat? Does she not encourage them to live and love? Most baffling of all: do not the maids themselves admit that she is kind and adoring, that she is in fact killing them with sweetness? What has she done to deserve such hatred, such grotesque caricature? (Grotesque but also fabulous: performance artist Sympathie the Clown’s portrayal of Claire portraying Madame is purest camp. His Dudley Do-Right chin is more than a match for his bouffant wig and white dressing gown, and his thrillingly rich voice makes his wildest declarations sound, if not normal, then at least natural. And his hulking exuberance is nicely contrasted by co-star and director Connor Berkompas’ slight reserve. Even when Solange is enraged or agonized — “This is killing us, Claire” — he sounds one step removed from his own emotions.)

Madame has been a mistress; that is all, and that is enough. The slogan painted on the white sheet that forms the opening scene’s walls reads “Ni dieu ni maître” — “No gods, no masters.” Her authority is her crime, the thing that curdles every kindness and poisons all those under its sway. Were they not conscious of Madame’s flowers, would the maids resent their sink? (Well, maybe; the pair are old hands at resentment, clawing away at each other even as they dream of clawing Madame. They probe one another’s weak spots: a traumatic encounter with the delivery boy, a failed attempt on Madame’s life…) Genet’s play seems less about class warfare and more about the inherent evil of serving. Madame is more victim of her own happy circumstance than villain here, and if the maids are wicked, well, they can explain why: “The beauty of my crime makes up for the poverty of my suffering.”

Getting back to those shadows: the thing about shadows is that you can’t be sure what’s in them. (Scintillating insight, I know.) And obscured vision, confused vision, misled vision is very much on the production’s mind. The male leads refer to each other as sisters throughout, but at one point, Madame informs the audience that “those boys do worship me.” (Confusing, much like Madame’s accent, which actress Annabella Joy makes sound like a commoner putting on society airs. We don’t see much of her, mind you: even when she’s onstage, the view we get is controlled by the maids, who use mounted cameras to send her image to large, obscuring TV monitors. More grotesquerie) There’s a crazed romp played out under strobe lights, but it’s not as disorienting as the finale, where it’s hard to tell just who is real and/or alive and who is imagined and/or dead.

What I liked best, besides the twisted intimacy between Claire and Solange, was the show’s youthful energy and ambition. The play’s Wikipedia page mentions that Jean-Paul Sartre wrote an introduction for it that quoted a different Genet character saying that if he had a play written for women, he would cast adolescent boys. Sympathie and Berkompas aren’t adolescents, but they aren’t too far removed from it. Still, they ably convey characters who have long been accustomed to deprivation, and they make expert use of their few props — most notably, an absurdly long string of pearls and an oversized portrait of Audrey Hepburn as Holly Golightly — to make a sad world for their mad ladies to inhabit.