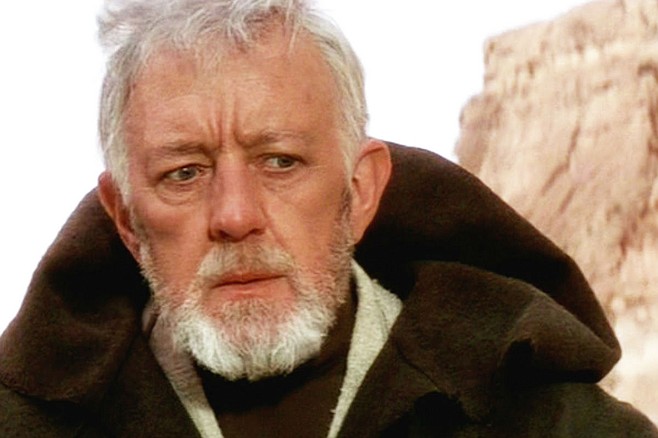 A Midsummer Night’s Dream, Star Wars, and me

Permit me a wry grimace as I imagine theatrical legend Alec Guinness’ reaction upon learning that a theater critic’s first memory of him — of any sort of performance, really — came from Star Wars. Not just the movies — The Bridge on the River Kwai, Kind Hearts and Coronets, that sort of thing — but Star Wars. “Fairytale rubbish,” as he put it in a letter to a friend. Poor fellow. You never know what it is that’s going to make you immortal. I can’t imagine Peter Ustinov dreamed he’d endure as Prince John from Disney’s Robin Hood, or Boris Karloff as the narrator of The Grinch Who Stole Christmas.

A couple of (hopefully) mitigating factors: first, I would have been just five or six at the time, and second, most of my subsequent early aesthetic memories are connected with the stage. (Thanks, Mom and Dad!) Often, it was the stage at The Egg, a concrete oddity in Albany, New York that was home to the Empire State Institute for the Performing Arts. A gorgeously lissome and loinclothed Puck leaping his way through A Midsummer Night’s Dream with inhuman grace — a propos, since he wasn’t human. The fierce, frightening, even violent love suffusing the moment when Annie Sullivan breaks through to the blind and deaf child Helen Keller in The Miracle Worker. The joyous smashing of worldly idols that comes with Grandpa Vanderhof’s titular speech in You Can’t Take it With You. Later, I would swoon to the checked eroticism of Kiss Me, Kate’s “Too Darn Hot” at the Hanger Theater in Ithaca. And now that “gaslighting” has entered the common parlance, I find myself recalling the dread that descended as the lights dimmed on actors and audience alike during a local repertory production of Gaslight.

I love movies — I spent a lot of childhood savings seeing The Empire Strikes Back five times when it played back in 1980 — but I remember plays. At least in part, I think it’s because theater allowed for a compassion — a “suffering with” — that movies couldn’t quite manage. No larger-than-life silver-screen gods and goddesses; just people, transformed by their craft and our imagination. I’m delighted to be taking up their company, if only as a commentator. (My high-school plan to attend NYU and become an actor was foiled when an alum who’d landed a spot in the original Broadway cast of Les Miserables came back to his alma mater to perform and encourage us to chase our dreams. His generous act backfired: looking at him, and then at myself, I decided the chase was of the wild-goose variety.)

Getting back to Star Wars: I come to this assignment fresh from 10 years as one of this paper’s film critics. One of my last reviews was for the final nail in the original saga’s coffin, Star Wars: The Rise of Skywalker. This critic’s critics weighed in via Facebook, and told me that I was a complete idiot, and probably drunk. But my favorite came from a Mr. Andrew Frederick, who let me know that “If you are not a Star Wars fan then your comment is not valid. Critics chew things up and regurgitate what they think is a witty or sharp response. You have proven that critics need to be a dying breed, their points are not valid, the real power is to the audience and people watching the movie.” Well, drat. I’m all for chewing things up (or at least over) — and even digesting. And if it’s true that iron sharpens iron, then mustering a sharp response seems worthwhile for everyone involved. But if fandom — for Star Wars, or even for something more commercially precarious, like, say, local theater — is the real point of things, then he may have a point. We’ll see.

In the meantime, I’ve got a job to do. To aid me in my efforts, I wrote to Terry Teachout, theater critic for the Wall Street Journal, to ask about background reading. He kindly replied: “The very best things for you to read, I’d say, are collections of the reviews of the best and/or most effective drama critics of the past — Harold Clurman, Kenneth Tynan, Brooks Atkinson. Frank Rich, John Simon (only for his raves, which are very different in character and quality than his pans). In addition, I think it would be helpful for you to learn as much as you can about the process of making theater, and the one must-read nuts-and-bolts book on that subject is Alan Ayckbourn’s The Crafty Art of Playmaking. You might also want to look at some of the best theatrical biographies and memoirs, of which I especially like Simon Callow on Orson Welles and Charles Laughton, John Gielgud’s collected letters, Neil Simon’s memoir, and — of course — Moss Hart’s Act One. That’s a start. Oh, yes — don’t forget William Goldman’s The Season, which remains far more relevant today than you might expect.”

Santa got the memo, and has delivered The Crafty Art of Playmaking, Act One, and, after a bit of hunting about the workshop, The Season. I have my marching orders, and I look forward to the campaign.

Don't forget biographies of Orson Welles. As for movies that dive deeply into the "process of making theater," near the top of my list is "Finding Neverland."