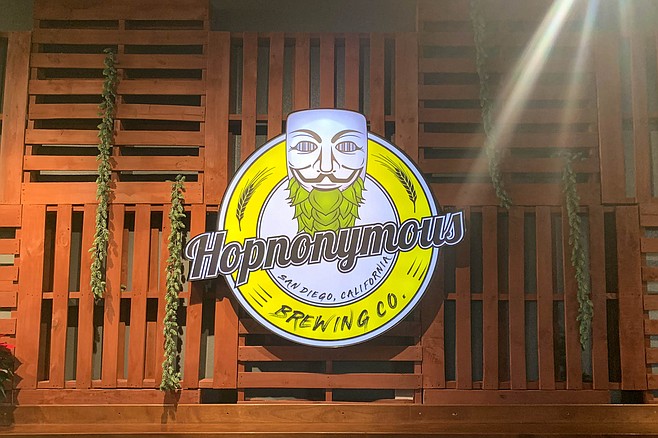 With a new taproom, an under-the-radar beer company comes into the light

It's while working for the latter that founder Remy Zurita got the idea to launch Hopnonymous, when Buona Forchetta’s owners expressed an interest in serving house beers. Before long, Hopnonymous found its niche as an under the radar presence in the San Diego beer industry. But when the opportunity came up to move into a turnkey brewhouse and taproom, Zurita decided to take the brand public. “Okay,” the Dunkirk, France native recalls thinking, “let’s meet our customers. Let’s not be incognito anymore.” 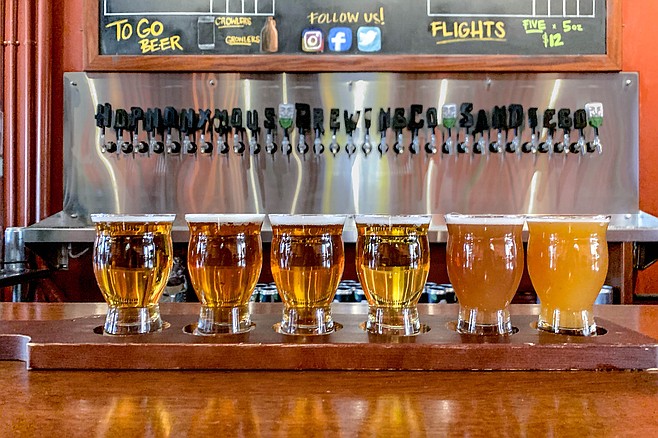 These tap handles spell out the name of a new San Diego brewery: Hopnonymous Brewing.

So in June 2019, Hopnonymous took over the former Kearny Mesa brewhouse of Council Brewing Company, and just before Christmas, pouring its own beers, brewed in its own brewhouse, to the public for the first time.

The head brewer now overseeing these beers is Hunter Mannix, a ten-year San Diego beer industry vet who previously worked for Coronado Brewing and Mikkeller Brewing, among others. The top beers on the menu are those favored by restaurant clients: a blonde ale and west coast style IPA. You might find these same beers poured under a restaurant’s given name out in the wild, but in here they’re called Bringin’ Blondie Back and Plan of Attack, respectively.

The taproom side of the business is still new, so Mannix has so far only managed to populate a third of the taproom’s 30-plus tap handles, which have been 3-D printed as letters spelling out Hopnonymous Brewing San Diego, with several handles featuring the brand’s logo: the Guy Fawkes mask adopted by social activist hacker group Anonymous, but with a hope cone beard.

Not all of the beers have been made expressly for restaurant clients, but thus far, most have been made with consideration for restaurant clients. For example, a new North Park restaurant, Belgian Beer & Waffle, wanted to stock all eight of its taps with Hopnonymous brewed beers (poured with custom branded, waffled shaped tap handles). So since Hopnonymous secured its brewing license, Mannix has kept busy in the small, 3.5 barrel brewhouse working on beer styles supported by restaurant customers, such as a pale ale, fruited wheat ale, and Mexican lager.

However, now that he’s had the time to get the restaurants’ needs under control, Mannix has been able to pursue another purpose of the new taproom: research and development. With the new year, the new taproom will introduce new beers that won’t necessarily go out to restaurants, but may pique the interest of dedicated beer fans. “I was able to finally get an inventory,” explains Mannix, “so now I have a stout going, a 10 percent imperial stout.” That’s in addition to a special occasion pastry stout for Belgian Beer & Waffle, brewed with some of its waffles.

He plans to introduce a second Mexican lager, this one made in the style of Modelo, using the same yeast strain. He and Zurita look forward to seeing how their taproom customers respond to the two, and use the feedback to figure out which style might best serve restaurant clientele. “Meeting our customers is the main point,” a friendly Zurita reiterates, as he serves drafts over his new bar counter.