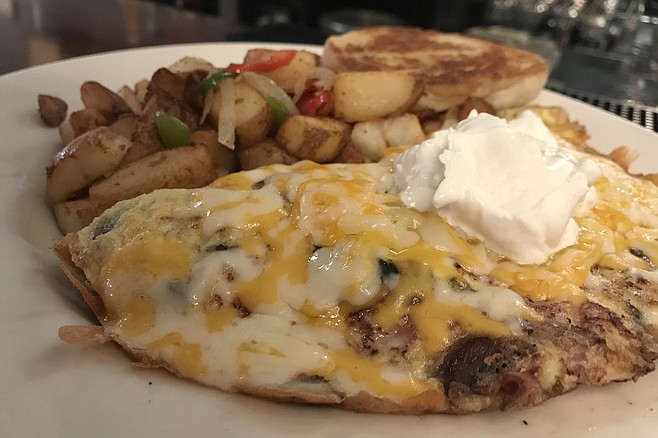 Did Joan Crawford own the bar at Brian’s 24?

I suddenly remember why I came... the Peanut Butter Burger

On the other hand, not totally together yet. I look up along deserted Sixth Avenue. Right now, it’s a highway for seagulls, cruising at head level, looking for leftover scraps from last night. Plenty of time to land on the street and lever off some pieces of squashed taco.

Came down Sixth looking for somewhere, anywhere, that a man can get something solid in his stomach at this hour, like 6:30 am. Something to soak up all the sin of last night.

Truth is, I had an ulterior motive when I came down here. Wanted to see something, and try something. For the longest time, I had heard that 1940s movie star Joan Crawford had actually owned the bar here. Not the place, but the really ancient counter in the pretty ancient Brian’s 24, the always-open eatery at 6th and E, inside the Ramada hotel. Needed to come in and see for myself. 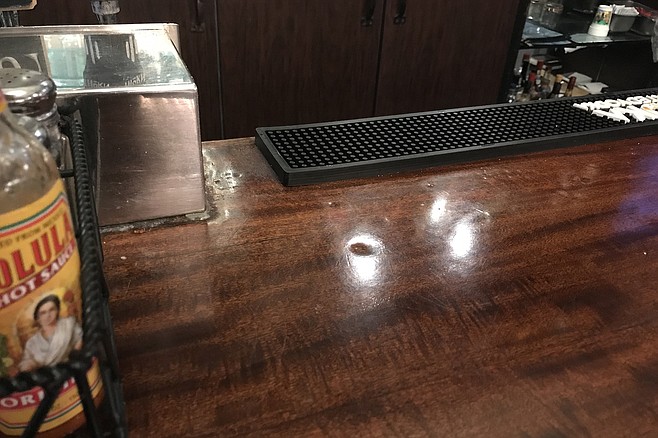 And, through the cobwebs of my mind, I remember coming in here, noticing their seats had no cushions (probably so nobody got too comfortable and stayed too long) and wishing I’d had a burger of theirs. But there’s not a lot of recall going on right now. Maybe another slurp of coffee?

But now here is Jose, inquiring if I’d like something to eat. I kind swirl through the brekky items. Not bad prices, considering downtown and 24-hour operation. A crunchy granola with pecans, almonds, raisins goes for $7.49; eggs Benedict is $15.99; corned beef version is $17.49; a waffle cristo (ham and cheese in a bacon waffle) is $16.49. Biscuits and gravy with bacon or sausage runs $14.49. Same price for huevos rancheros. Better deal is “two eggs plus,” $9.99, and that includes toast, hot cakes or tortillas, plus all-you-can eat home fries. Deal! Home fries do have a cautionary note, though: “Except when sharing.” 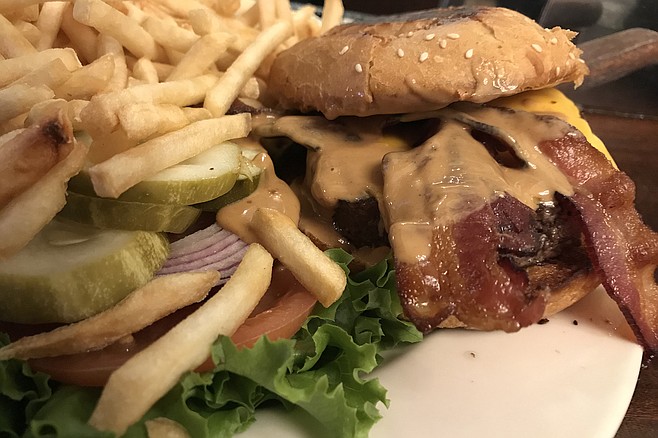 Leaking PB tells you what sweetness to expect

Jose, who’s lookin’ after me, says chicken and waffles are the most popular dish right now. Basically half a fried chicken with Belgian waffles. Wow. Surprise.

They must do a lot of business with sandwiches because they have over a dozen, between $10 and $16.

So just to get things rolling, I order up Brian’s 24 Omelette. For $14.99 you get diced ham, bacon, mushrooms, onions, melted Swiss, and sour cream. For a hungry, slightly hung over boy, this turns out to be Nirvana. One, there’s plenty of it. Two, love the sour cream lightening things on top.

Problem: I suddenly remember why I came. It was for a burger. Now I remember! It was the Peanut Butter Burger. I liked how they described it: “Don’t be afraid. Our 1/2-lb patty topped with peanut butter, bacon, and American cheese. If it wasn’t great, we wouldn’t serve it.” Costs $15.99.

So I do something I never do. “Can you pack this omelet to go, and give me a peanut butter burger?" I ask Jose. He smiles, like he’d been waiting for years for me to make the right choice. In a way, I guess he has been. So have I. 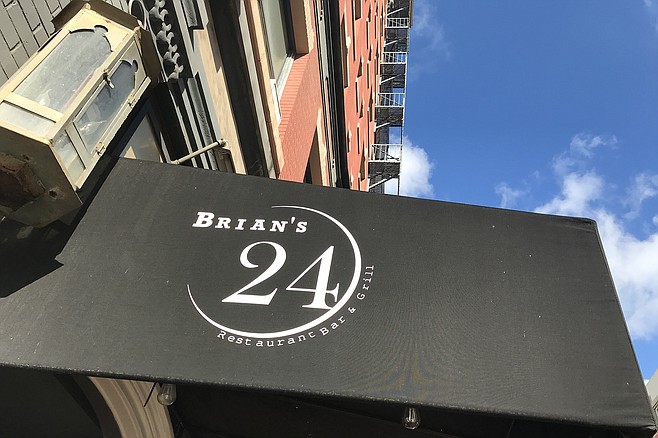 The PB burger costs $15.99, but I think of it as an investment. A couple of days in the fridge will only improve what I don’t eat here.

So I’m into my third coffee when the burger arrives. I’d asked for the patty to be medium with crispy crunchy edges, and that’s exactly what I get. What’s more, the bacon doing a Rolling Stones imitation is beautifully thick and also a little crispy. But the icing is the PB oozing out from under the bun. And wow. Almost Thai with the peanutty thing. This really is an excellent idea.

“Good teeth,” says this gent next to me.

He’s looking up, to the backboard.

And, now I look again, I notice a lot of great old-school woodwork. 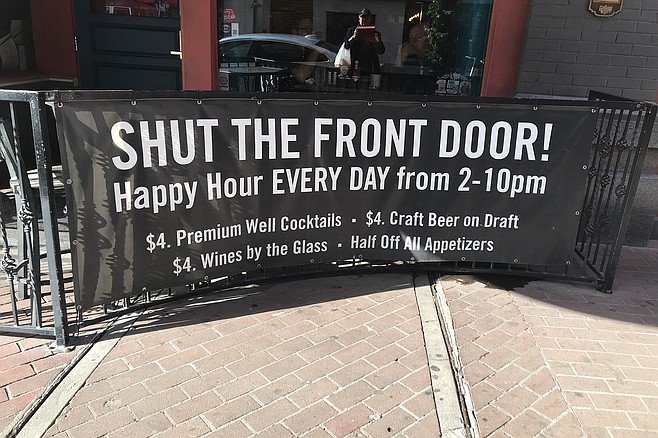 I follow his eyes up the backboard. Ah. Now I see. Right up the top, the support for the top display shelf is notched like teeth.

“Don’t see a lot these days,” he says. “Used to be a carpenter. Computers do it now.”

But then I see what I came for. Right in front of him. Dents in the ancient wood. Like half-inch round dents.

“Uh, did Joan Crawford use to own this counter?” I ask Jose.

“And did she use to dance on it in her stilettos?”

“Yes, and you can see where she dented the wood, right here.”

He puts his finger in the dents right in front of me. Huh. The actual Joan Crawford danced on this actual bar. I knew I’d had this conversation before. I wonder how crazy the nights were when she jumped up and started wowing her Hollywood buddies. Because this was up there in her house before it was shifted down here.

Seems the right song for the day. Happy New Year, my friends.